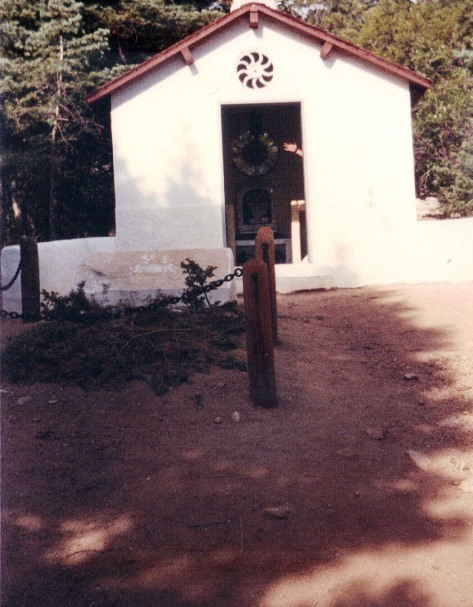 “After Lawrence died, Frieda returned to the ranch accompanied by Angelo Ravagli, her Italian lover and later third husband. In 1934, she had this memorial built for Lawrence. The following year Frieda had his body exhumed, cremated and the ashes brought to Taos. Her plan was to have the ashes housed in an urn in the memorial but Brett and Mabel Dodge Luhan wanted to scatter the ashes over the ranch (while Lawrence was alive the three women often competed for his attention). In response, Frieda dumped the ashes into a wheelbarrow containing wet cement and exclaimed, “now let’s see them steal this!” The cement was used to make the memorial’s altar. There are other stories concerning the whereabouts of Lawrence’s ashes but this one is the most widely accepted.”1

Once upon a time, long before I ever imagined a .com in my life, I loved the road’s surprises and chasing down places that either meant something to me or to someone else that I had some interest in.

The back of this photograph is stamped October of 1989, though I would have to retrieve my journal, from that year, to know exactly when we took this trip. In those days, taking and printing photographs, was quite a luxury, so I can well imagine the trip was months before, and I simply had to wait to develop the film. I so appreciate the photograph being dated.

What I do remember is that we had gone to Taos, New Mexico, looking for Georgia O’Keefe’s’ home, not D. H. Lawrence’s gravesite. Though I had read his work, I did not know he was buried in New Mexico and as Kate admitted tonight, she had did not know who he was, at the time. Thus, if you look closely, the hand sticking out irreverently is Kate’s as this was not a particularly meaningful stop for her, but I was quite excited to find a connection to this English writer in the West.

He and his wife, Frieda, owned a ranch, Kiowa Ranch, Taos, New Mexico, in the 1920’s, which today is under the care of the University of New Mexico, the custodian of his memorial.

We had a wonderful time in Taos, and returned several years later, when an opportunity presented itself; we did find Georgia O’Keefe’s home as well!