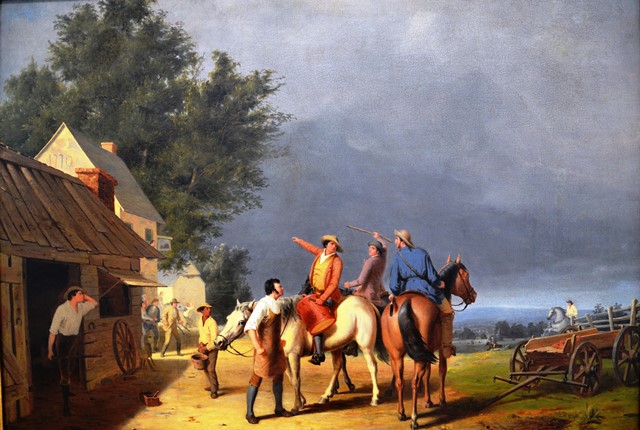 First News of the Battle of Lexington

“The skirmish between Redcoats and Minutemen at Lexington, Massachusetts, on April 19, 1775, signaled the beginning of the American War of Independence.  More than seventy years later, William Ranney chose not to represent the actual battle but its aftermath.  Describing the scene, a commentator – possibly the artist himself – wrote how:

The tidings spread – men galloped from town to town beating the drum and calling to arms. The people snatched their rifles and fowling pieces, and hurried towards Boston.  The voice of war rang through the land, and preparations were every where commenced for united action.”

My sojourn in New England has stirred an interest in Americana, which I shall confess has been a bit surprising.  As usual, for me, it is the colors in this painting that first drew me in, then the subject matter and technique, both which I find outstanding.