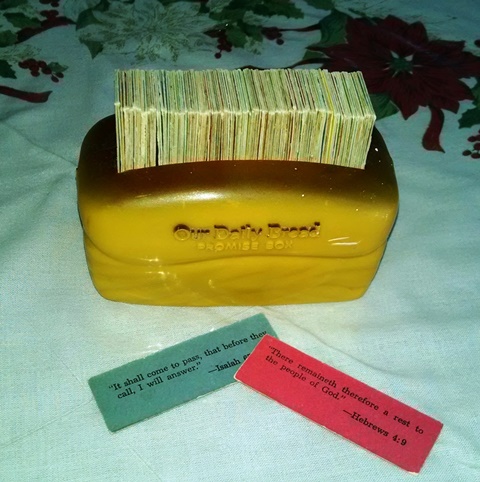 Definition of promise: “a declaration that one will do or refrain from doing something specified”
~Merriam Webster ~

Recently, I found this promise box, slightly visible, inside of a mixed bag of goodies, at a second hand store; while not interested in the other things I could see, in the bag, the stacked colored cards, most definitely needed to come home with me, as my memories quickly scrolled back to Granny Heminger’s table, where a promise box not only sat, but was read. The idea behind this little “bread of life” is that you remove one Bible verse a day or at each meal, and feed your soul as well as your body – a wonderful practice.

In theory, the grandparent is the person who raised the parent; a clear, simple logical progression. However, it is not just that we live in a world of alternative and step families that complicates the matter, but there are also countless other issues that impact familial relationships – can you imagine poor Cain and Abel’s children at family gatherings?

Growing up, I only knew of one of my grandparents, my Mother’s Mom, Grandma. My Father’s parents never left Cuba, and my Grandfather Cooper, died the week I was born. For me, Grandma was this magically mysterious and marvelous word that represented a woman who I had very fond, but few memories of; occasionally she and my Mother would speak, on the telephone, those instances were always celebrated, and likewise occasionally we would happen to find ourselves in Columbus, and be able to enjoy one of her Sunday dinners. Unfortunately, circumstances in life did not permit sufficient interaction with my Grandma to allow me the relationship with her that I wish I had had; nevertheless, I am grateful for what I was able to share of her life.

While Granny Heminger was not actually my grandmother, a woman who as far as I know, we had no biological or legal connection to, but whose house we would occasionally stay at and where we were made so welcomed, she most assuredly made me feel that this was what a grandmother experience should be.

Granny Heminger lived somewhere in Ohio, I have no idea where nor do I have any notion of how she might have come into my Mother’s life; nevertheless, she was Granny Heminger and I do remember spending time at her house, with a detached garage that had once been the barn; a place worthy of exploring in its own right.

There must have been a bedroom on the ground level, where she slept, but when we went to visit her, we all slept up-stairs in a converted attic that had two large double beds, each with its own chamber pot, tucked under it, at the foot of the bed; something I never quite understood, as a child.

I loved playing in her yard, and remember piles of autumn leaves, which we were allowed to run through and kick up in the air, enjoying their rustling sounds. She had a very respectable garden from which she grew the many things that ended up in the freezer, including rhubarb, which I first learned about from her. The garden butted up to a small hill covered in trees that we were free to roam and allowed to let our imagination run wild!

It was not long before we met some neighborhood children that expanded our access to those back woods, but I do not think anyone would have cared if we played in their trees, in those days.

(On a bit of a side note, it was while staying at Granny Hemingers that I first tasted homemade flour tortillas and refried beans. One of the neighbors, who must have either been friends with my Mother or whose children we must have been playing with, invited me in for a snack, and I remember marveling at the bean burrito that she made me; honestly, to this day, I make my refried beans with evaporated milk, because of that woman.)

I also remember her standalone freezer and I must say I thought of it as a rather remarkable entity. Mostly, it was filled with white plastic containers, whose lids all had strips of masking tape attached, that were marked with the contents; things like strawberries, raspberries and the rhubarb that grew in her yard. Somehow, even when we were not expected, she had the ability to go into that freezer and within minutes she would manage to put a fine, respectable spread on the table; her offerings were always delightful and limitless. The meals were taken at the kitchen table, I do not remember there being any kind of formal dining room, and along with our food, we were read a scripture verse from the promise box.

As a New Year begins, I know that I am not alone in thinking about promises: “a declaration that one will do or refrain from doing something specified”. The notion of a promise is about hope and expectation that whatever it is that ails us will improve; whether our desire for change is with ourselves or others. Sometimes, when people speak about their New Year’s resolutions they will talk about things they would like to do or places they would like to go, much like one would when making a “bucket list”; however, most often those resolutions refer to behavior they would like to change. Whether it is quitting some unhealthy habit like sugar or tobacco, or adding a healthy one, like exercising or eating more vegetables; either way the resolution involves hope.

I know that hope can be a rare and highly illusive commodity, especially in our world today. I think age, experience, disappointments, and failures can make us feel disillusioned and filled with despair instead of hope. The old adage “if at first you do not succeed, try, try again” can sound hollow and dismissive; especially when all of your efforts lead to the exact same results that you so dearly tried to change. So what do we do?

So often, I feel the barbarians pounding at the gate – those barbarians can be any tide that seems to sweep through our lives that we would rather keep at bay, but are weary of fighting. Do we surrender or put up one more fight, because the calendar has changed, and tradition tells us that at the stroke of midnight, we are supposed to get a new chance to get right whatever went wrong the year before?
It is a good question and one that I cannot answer for anyone but myself; because it is the first day of a New Year, I have to try to hope – at least a baby step of hope.

I have placed my little bread box on the table, and my resolution for the New Year to not only read on little piece of hope a day, but to actually ponder of all of the words in the Bible , why is it that this is the card I pulled out today?

That is all for now.