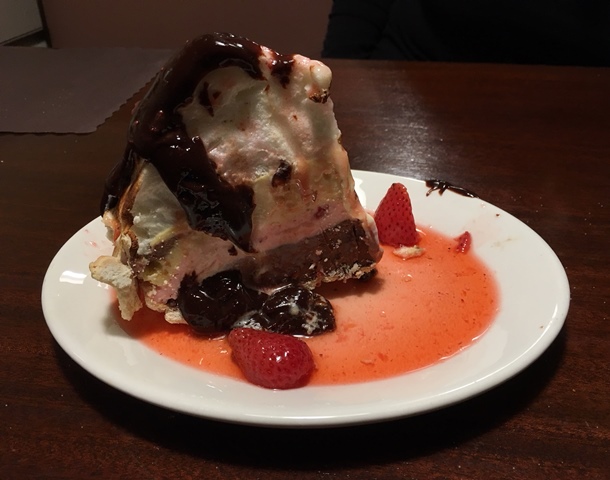 “The most common claim about the name baked Alaska is that it was coined at Antoine’s, a restaurant in New Orleans, Louisiana, US, by its chef de cuisine Antoine Alciatore in 1867 to honor the acquisition by the United States of Alaska from the Russian Empire on March 10 that year. However, no contemporary account exists to support this claim, and the name would not be used until some years after the Alaska Purchase. Delmonico’s chef Charles Ranhofer himself called the dish an “Alaska, Florida” in 1894, apparently referring to the contrast between its cold and hot elements. The dish is also known as an ‘omelette à la norvégienne’ or ‘Norwegian omelette’, which similarly refers to the cold climate of Norway.”

For a while now, I have wanted to make a baked Alaska. Recently, Kate happened to sit with me for a few minutes, as I was fortuitously watching someone create a baked Alaska, on television (this will matter). After watching the creation come together, I felt determined that once there was room in the freezer, I was going to try my hand at baking ice-cream covered with meringue.

I do not remember ever having eaten baked Alaska, as it is a dessert that has mostly fallen out of favor; but it certainly shows up in many of the old cook books that I collect and read for absolute pleasure; and along with floating island it is part of my nostalgia of foods from another time, when I like to think of the world as a bit more genteel, especially surrounding how food is prepared, shared, and consumed.

Through a series of unexpected incidents, we recently found ourselves at a restaurant, whose draw was that we were hungry, away from home, and the parking lot was all but full; we had two spots to choose from, in trying to park the car.

The moment we walked into the restaurant it had that feel that said it had been in business for a while, and a menu that reflected a by gone era – perfect in my world!

We ordered dinner, I must admit Kate did better than me in her choice, but I did not care because I was enjoying the ambiance and the service that night was outstanding, in every way. Our waitress was attentive but not intrusive, a fine line to walk. She kept the water glasses filled, politely told me that next time I could order my Caesar salad, yes a real Caesar salad, without croutons, when she noticed I did not eat them, and cleared away the dirty dishes seamlessly.

When we asked to see desert menus, she brought them to us, bound in their thick Naugahyde like portfolios, like restaurants might have in say 1963. Before opening the smaller menu; I asked what she might recommend, without hesitation she said: “The baked Alaska.” What, I asked, you have baked Alaska?

She said yes and it was a customer favorite; she went on to describe how she has watched it being made, and told us we could have it with either hot fudge sauce or strawberries. We asked if it was big enough for two, and she immediately said absolutely, no up selling. I told the waitress I had never had baked Alaska and had wanted to try it, Kate was equally enthusiastic, which both surprised and delighted me (see watching it made on television mattered), and I told our waitress to bring it with the hot fudge sauce, as I know Kate is not a huge fan of strawberries, and I was simply thrilled at the prospect of eating this fabled dessert. Kate however, quickly said no, you like strawberries, and the waitress said no problem, I will bring both, which she did!

As we waited the few minutes it took for our waitress to bring us the baked Alaska, we chatted with the anticipation of a child at Christmas. The older we get the harder it becomes to have “firsts”; the idea that we were about to eat something we had never before had or at least did not remember ever eating, was quite exciting to us; also we were happy to be expanding our world and stepping out of our comfort zone, something that always matters to me.

We thoroughly enjoyed our baked Alaska, the moment, the restaurant, the ambiance, and of course the service; which regardless of how good or bad the food may be, always makes the difference between a nice experience and one that is only tolerable. Thus when she brought the check, again in one of those small Naugahyde portfolios, we were happy that we were in a position to not only properly tip her, but to show her how much we enjoyed her being so professional and pleasant. We paid our bill in cash and told her she was all set; she thanked us, invited us to come back, and wished us a good evening.

The restaurant was starting to clear out, not that it was so late, but rather the inclement weather was expected to get worse. We too began to wrap-up, when our waitress, unexpectedly came back to the table, to sincerely thanks us for the tip, she seemed genuinely moved, which was nice; but even more, she behaved grateful. Our act of kindness, which was in response to her kindness, had impacted her and she wanted us to know that she appreciated us thinking of her.

When we got to the front of the restaurant, she approached us from another door, and once again thanked us, while we complemented her, in front of her manager, for the outstanding service, and again thanked her profusely. The manager took note, he had offered us a table in the tavern, when we first came in; there was no wait to be seated on that side of the restaurant. We had declined; he now told us the table was near the television, so that we could have watched the game – I had no idea what game he was talking about, and I said so aloud, and we all laughed and said goodnight.

As Kate and I made our way to the car, still excited by having had a new and nice experience, our conversation seamlessly shifted to the attitude of the waitress; we were feeling so grateful that she had been so nice to us and likewise that she had been grateful for our kindness to her.

We drove home feeling invigorated, despite the below freezing temperatures and falling snow, that in theory should only make one want to climb into bed and pull the covers up, over your head – why was it that we were feeling so happy? Why do acts of kindness make both the giver and receiver feel good? Why does a sincere thank you make our efforts, on behalf of others, feel so light instead of burdensome?
I have no idea how the waitress’ day had gone or how she treats all of her customers; I would dare to assume that she is always professional, but also human and reacts to people being polite and considerate, as do we all. She could not have known if we would express our gratitude for her kindness and professionalism, or even for her service. I am sure she had some expectations, just as we did, of how the interaction would transpire, but how nice of her to set the tone, for our evening, by being both kind and grateful.

Being kind matters, the worse things are in the world, at large, the more our acts of kindness matter; and yes as Acts 20:35 states: “It is more blessed to give than to receive.” ; but it is also nice to know that giving a new customer both hot fudge and strawberry sauce, when you did not have to, was noted.

I do not understand why we have become a culture of expectations and demands, but in my forever longing and looking back, may I suggest that we take a page out of the past and return to not only being more grateful but to expressing our gratitude. Who knows, you too may have a waitress suggest that you try the Baked Alaska! That is all for now.