A Mop by any Other Name 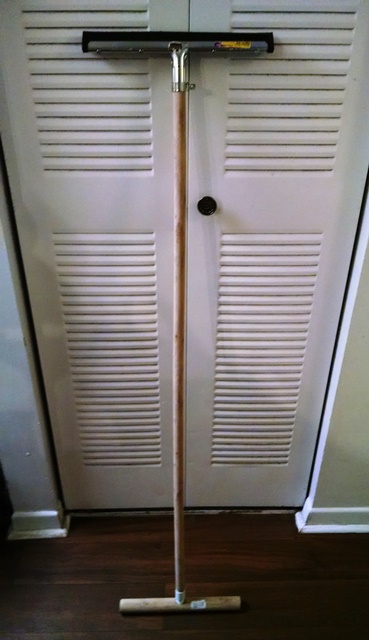 Did you know there was such a thing as a Cuban mop? Well there is and it is fabulous. The T shaped mop is two pieces of wood that you wrap a rag around, to mop the floor; once you are done, you simple throw the rag in the washer, and the next time you go to clean the floors, you are starting with a very clean mop. I truly love my Cuban mop; though I did not grow up with a Cuban mop at home, and it did not enter my life until I was 40, however, I could not imagine having to go back to the other, shall we say American mop.

For whatever reason, humans like the familiar and we are drawn to the known; yes, I am the first to proclaim the allure of discovery, but when I saw a Cuban mop at Blanche and Christine’s home, I got very excited. I was intrigued that they had discovered the Cuban mop. As soon as I blurted out “oh, you have a Cuban mop”; Christine pointed out indeed it was a Cuban mop, but it had been adapted, and was now Egyptian!

It was true; they had added a squeegee to the opposite end of the T, not a feature on the traditional Cuban mop. But what further intrigued me was that they had called it Egyptian; the girls are not Egyptian, though they are from the Middle East. I stood there for a few minutes contemplating the mop, I know perhaps a bit silly, but I do a lot of mopping! What stuck with me was the notion of adaptability, in both humanity and in our nation, at large.

I believe it is natural to be apprehensive when dealing with change and the unknown. There are challenges that can feel overwhelming, when we must navigate unfamiliar territory. I happen to be a person who loves stepping off of a train or out of car or a hotel room, and hitting the streets of new places. The less encumbered I am, the better I am able to explore; and it is by foot that I most enjoy getting to know the unknown. I want to interact with the people who live or work there, I want to eat what I have not previously tasted, and hopefully from a street vendor or restaurant where the locals eat, and I want to consume both the natural and manmade sights and sounds; however, and this is a fact that has always been true, I also enjoy coming home. Regardless of how wonderful the road has been, there is something very comforting about walking into your home, climbing into your own bed, and eating your own food. For me, it is about finding the balance; but I am well aware that for many it is a desire to only have the familiar that drives their life, and for a few it is the exact opposite, but only a few.

Perhaps oddly, but the mop made me think about this dance between the familiar and the unknown and how in these days of such rancor, we need to find a way, to see and focus on what values, dreams, hopes, and desires we share with one another, instead of only focusing on our differences. Now, do not get me wrong, you have to mop your floor; I am not in any way comfortable with people deciding to let their floors go un-mopped, but what I am purporting is that how you mop them is not important; what matters is that they get cleaned.

There are beliefs and ideals that tie Americans, in the 21st Century, to those forebearers of hundreds of years ago; and regardless of when you arrived or where you came from, if you are planning to make this your permanent home, you need to embrace what it means to be an American.

For example, we are very big on the notion of freedom of religion, freedom of speech, and freedom of the press; do not come to America and decide that you want to censor or control how we do or do not practice our religious beliefs, including trying to dictate your concept or morality to others, it will not go well. We believe in the notion of the “American Dream”, it is truly a wonderfully hopeful belief that says you can do and become anything you want, regardless of who or what your parents were, if you are willing to work, and work hard, your world really can be limitless. Also, we believe in lending one another a helping hand; Americans volunteer! We feel responsible not only for our own little world, but for our neighborhood, community, and even the stranger.

This is of course not an exhaustive list, but a place to start, however, it is also important to recognize that we have always made room, often starting at our table, like the Pilgrims, for new additions to our traditions. The clichés of Taco Tuesday and Pizza Party Night or Chinese for New Year are based in the fact that the descendants of those forebearers, have indeed embraced Mexican, Italian, and Chinese food, maybe not at once, and certainly not without a lot of work, on the immigrants behalf, and yes, maybe the food was welcomed before the people who brought the food; but who today would not include Mexican, Italian, and Chinese food on and “American” menu.

One of the things I most love about South Florida is the Cuban fingerprints that allow me to buy Cuban bread, Cuban coffee, Cuban pastries and Cuban foods, as easily as say White Castle burgers, in Columbus, Ohio. But thanks to the wonderful life I have had, filled with interactions with people from all over the world, I also love that I can easily buy things like Alwazah Tea or have the owner of the store come over to find out why I am buying Thyme tea, curious over who sent me – he was a bit suspicious, though I do not know why, as I have frequented his store since I first went to visit my Aunt Helen, over twenty years ago.

I am a person who needs and enjoys variety; I love tacos, but I could never have tacos every Tuesday, for the rest of my life. You may be different from me, and find great comfort in knowing you do not have to think about what you will be making on Tuesday’s ever again, that really is fine. I do not want to live in a country where we all have to dress alike, or worship alike, or eat alike, or mop alike!

We are fighting over so many non-issues; Cuban, Egyptian, American, or whatever else works for you has to be acceptable. America is a land of adaptability; we really do have room for more than one mop, what is important is that the floors get cleaned! That is all for now.