The Tree – Yes, That Tree 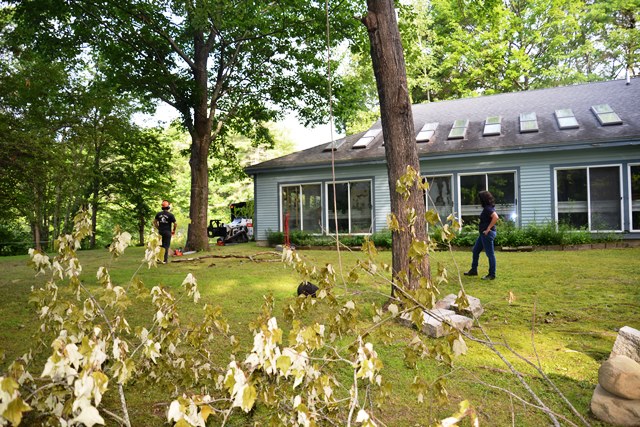 As spring came into focus, this year, we decided it was time to deal with a few of the trees that were too close to the house, including The Tree.

The Tree in our life, the infamous tree, is the tree that was involved in Kate’s life changing accident. I have included the link, from 2013, where she wrote about in incident. 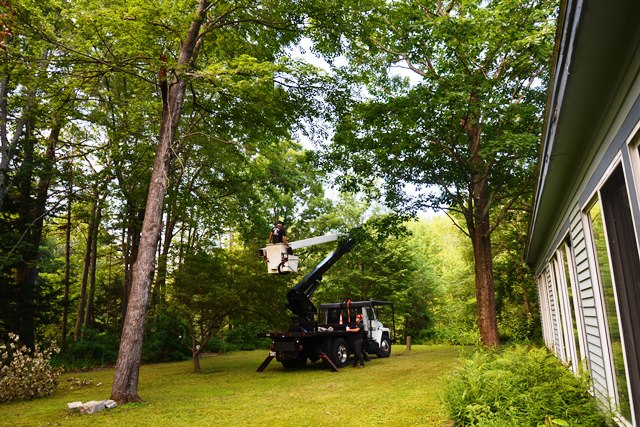 While we have felled our fair share of trees, since buying this house, the size of these trees required professional help; we hired Derek of DB Tree Maine, who did an amazing job. https://www.facebook.com/pg/DB-TREE-538659972886395/about/

The two trees that Derek handled were both hardwood, which in New England means that they can be used for firewood; but I wanted to do something more, especially with The Tree, than simply use them to help keep warm this winter.

As I began to play with what we might do with them, and Kate began her research into lumber, the one thing I definitely knew was that I wanted something positive to be birthed through what had been a source of anguish. 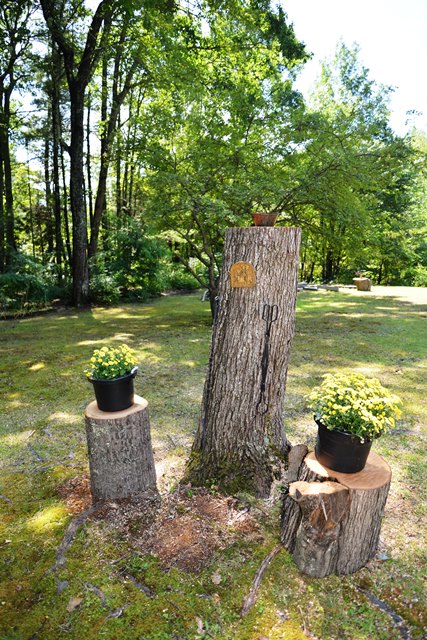 One of the primary reasons that we went with Derek was because of his willingness to, if you will, humor us. Before he made the first cut, I knew that I wanted the tree closest to our fire pit, to be cut high enough to house our fire implements, especially since the Gregan’s had updated Kate’s campfire tools, for her birthday – apparently they thought a cast iron, hooked rod, used to turn on sprinklers and a large stick, were not quite the right tools to poke and prod our fires.  For The Tree, I envisioned a table top, cut about waste high. 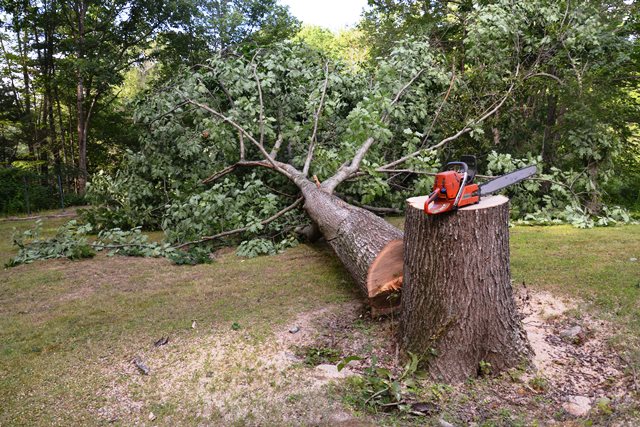 (I have to say, that as Derek was working, after taking The Tree down, I saw him put his remarkable saw on The Tree table top, and it brought me an odd sense of satisfaction; I felt like I had made a good choice, in deciding to make The Tree a table.)

The morning Derek came to take down the trees, we explained the height we wanted the stumps, and said that after the trees were felled, just to leave them, where they fell, and we would work on what we wanted to do with them next. He graciously did exactly what we asked, and offered to come back, when we were ready, to make additional cuts, if we so desired. 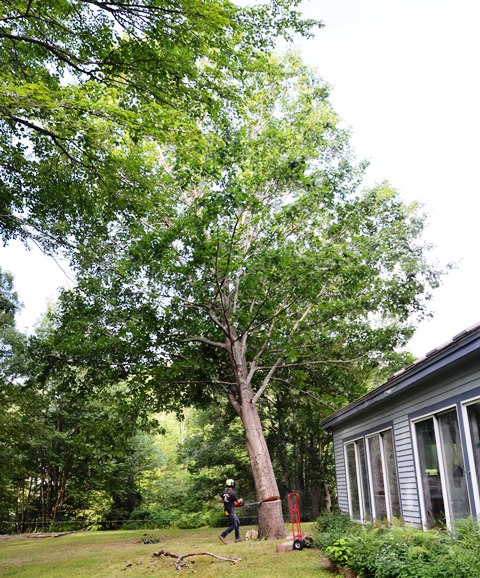 Watching The Tree come down, was a rather emotional moment, for us both; Marcial, who too has participated in our lumber jacking activities, perhaps said it best, when he learned of the trees fate: Revenge has been exacted – maybe there was a bit of revenge in there, but I can only imagine how very difficult it must have been for Kate to daily face the source of what is now a daily struggle – though she certainly has born it valiantly.

It was not until the trees were down, and we began the job of processing them, that I decided The Tree that was going to be a table, could also provide us with high stools, that would go around the table. I started to see The Tree as a place where we would entertain!

Of course, as is now true in our lives, we ran our ideas past Al, who gave us his seal of approval, that oddly means so much to us. We then scattered Tim’s sand around the base of The Tree, the sand he used last winter to help keep his truck safe, on the road; and finally called Derek and asked him if he could come by for those final cuts.

When Derek came over, and we shared our thoughts with him, he instantly embraced our desire, and with great skill went about not only making the proper cuts, but used one of the most amazing of tools, to help get these insanely heavy stools into the proper place – also taking the time to make sure they were level. 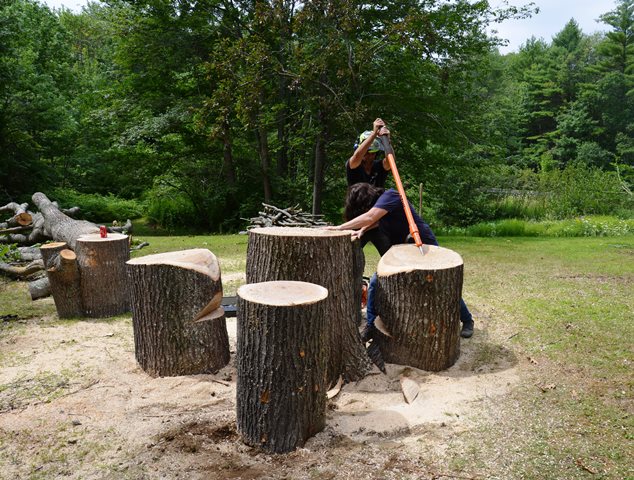 It was his idea to add the foot rest, and when the four stools were where they belonged, he did exactly what I had hoped for; he sat down, on the stool, to finish his coke. The three of us sat around the table and chatted, he told us he had been keeping an eye on our processing progress, and we all admired our joint efforts. 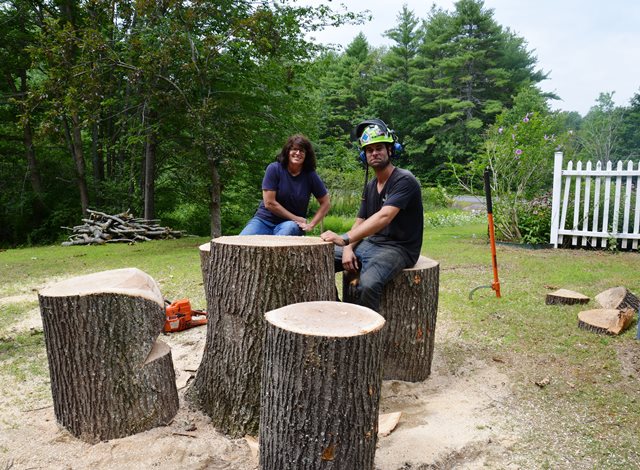 By the next day Al had joined us, and then Al and Lois, and finally, just this weekend, as we showed our creation to our first non-Mainer, she walked over to the table and stools, and hopped right up – exactly as it should be – I thought with delight! 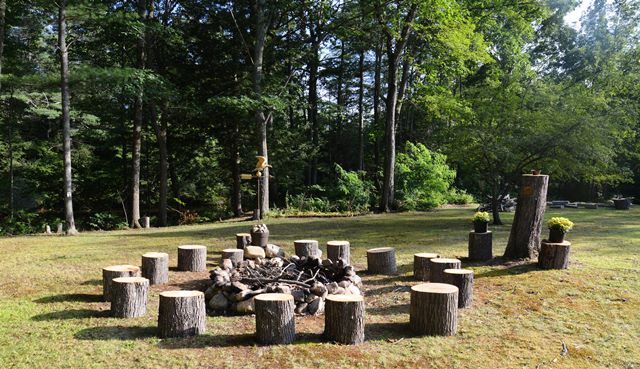 The rest of The Tree, along with some of the second tree, which had been hit by lightning and that the fire pit elements now hang from, provided us with seats for around the campfire, as well as a few glorious smaller tables, scattered stools, in the forest, several sign post, and a good deal of fire wood.

After the trees came down, opening up the back yard, Kate decided that she wanted to plant a rose garden, in the three plots that had lain fallow since we bought the house. I loved the idea of a rose garden; I have not had roses, in my garden, since Whittier, California.

A couple of days ago, as Kate sat working at her desk, she called out to me, to come, which I did. Al was bringing over his rototiller, to turn up the ground, in the future rose garden!  As we mostly got out of his way, he tilled the ground and prepared it for planting.  Yes, he did let Kate have a go with his rototiller; I have never known a man so willing to share his skills, knowledge and tools! 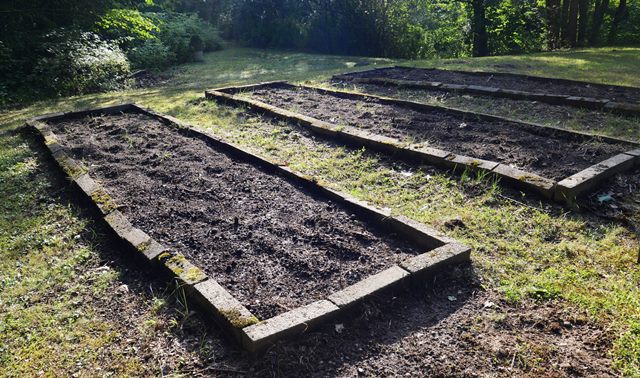 We are not done with the backyard, but we have reclaimed it and I have started to look for rose bushes, to plant this fall – because next spring, we are going to have roses growing in our yard! 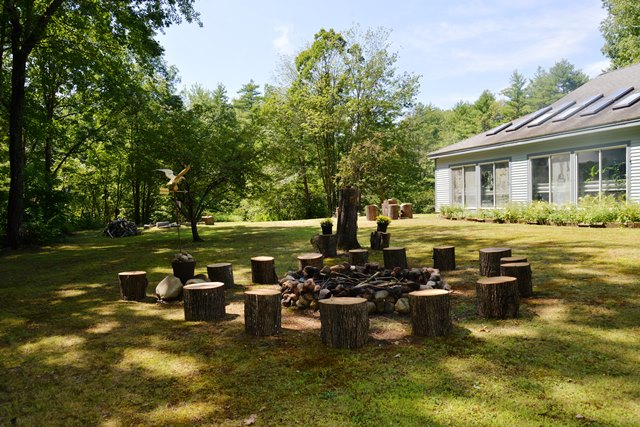 It is hard to believe that it has only been two weeks since the trees were cut down!

4 comments for “In Nature”