A Return to My Ducks

Can you see the little ducklings left foot, lifted up and ready to follow his mother? The ducks, or my ducks, as I and many of my neighbors once fondly referred to them, were the original inspiration for this column.  Yes, I am so enamored of these little fellows I could most likely post pictures of them monthly, and find something to write about their lives; but I am not sure the rest of you are as interested in the ducks as I am, so I have tried to offer you a bit of diversity.  However, this month I am returning to my ducks, because I want to – plain and simple. 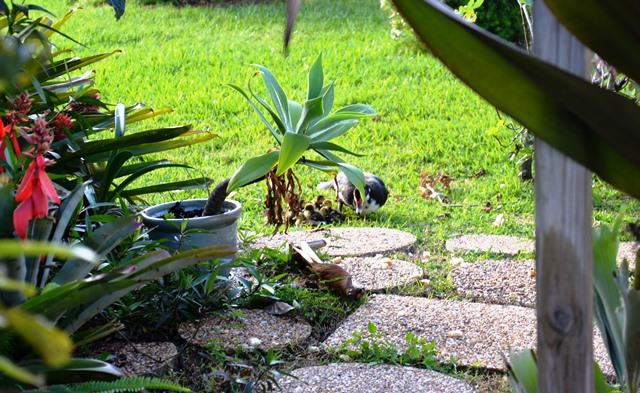 Inevitably, every time we pull into the driveway in Florida, the ducks are the first to greet us; and I must say they are the best welcome wagon in the world. Yes, they leave gifts behind that require I keep a supply of bleach on hand, but that small investment is worth the joy they bring.

One of the many changes in the neighborhood has been the addition of pets, which have greatly and sadly impacted our duck population. Our dog, Merry, always knew that the ducks were her siblings, and while she could interrupt them if the males were fighting with each other, and yes, she took issue when they mated – I think she was not convinced the female ducks were enjoying the process, Merry never hurt our ducks; the same cannot be said for the other cats and dogs that now wander the neighborhood, much to my chagrin.  Thus we now see few babies, a site that in the past always ushered in spring.

However, standing outside, doing a bit of maintenance in my orchid garden, I heard baby ducklings crying for their mother; and I went into action! I found six ducklings under a car, two doors down; two curious children were trying to cajole them to play, children who did not understand how terrified those poor ducklings were.  I did not quite cross the street, but stood on the opposite side and asked them if they had seen the baby’s mother?  They understood me to be asking about their mother, which they went and got.  We all chatted, and I took the opportunity to explain to the children that they could not touch the baby ducks, and that they needed to keep their well-meaning puppy away from them also.  After a few minutes, the mother took the children and the dog inside, and I went back to my work, satisfied I had at least informed one family about the needs of my feathered friends.

A few minutes later, the mother duck showed up, in my yard, with the rescued ducklings and the rest of her brood! I was thrilled!  It had been a while since a mother duck had brought me her babies, and made their home in the yard.

There is something rather amazing about watching a mother duck protect her ducklings. She quite literally will sit herself upon all of them, covering them with out-stretched wings if necessary, to protect them.  I love watching them together, and yes there are losses that come, which break my heart – but today, as should be true of every day, I choose to enjoy this moment and share with you a sign of spring!