Nathan Hale and the Homestead 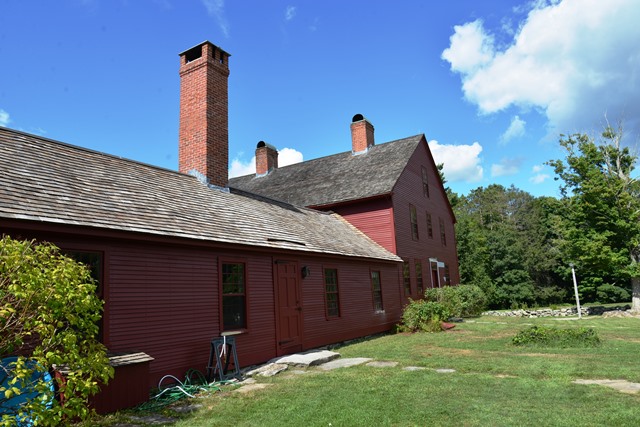 Do you remember Nathan Hale from a history class or movie or maybe the cartoon Liberty Kids?  Perhaps, it is just those famous last words, of his, that have seared themselves into your world, though you are not quite sure why.

In total six of Richard Hale’s eight sons, including Nathan, fought in the American Revolutionary War; three of his brothers died from wounds, after the war; and Nathan was executed, as a spy in 1776.

I find it interesting that five of Nathan Hale’s brothers took part in the battle at Lexington and Concord, and yet we do not speak of them. Instead it is Nathan who has survived through the annals of history.

Do you ever wonder how many people still share the sentiment, expressed in those last words today? I do.  Nathan Hale lived a short but memorable life, and one worth considering.  He was born in 1755, in Connecticut and died on September 22, 1776, executed by the British, in New York, as a spy, at only twenty-one years of age.

At fourteen he left for Yale, with his brother Enoch who was sixteen. At eighteen, Nathan graduated first in his class, and became a teacher, a profession that would have automatically exempted him from the war, had he so desired, instead he joined the militia, at the outbreak of the war in 1775, eventually becoming a first lieutenant in the Continental Army.

In September of 1776, Hale who had volunteered to spy on the British, in order to secure information General George Washington felt vital, in his fight against the British invasion of Manhattan, went behind enemy lines disguised as a school teacher, the job he had in civilian life.

Having successfully completed his mission, Hale was returning to his regiment when he was captured on September 21, 1776, with incriminating documents, on his person.

Nathan Hale was not given a trial, he was however sentenced to hang; he asked for a Bible and to speak to a minister, the night he was captured, both request denied by the British. He was however, permitted to write two letters, one to his mother and the second to a “brother officer”.

According to one British officer, on the day Nathan Hale was executed: “He behaved with great composure and resolution, saying he thought it the duty of every good officer to obey any orders given him by his Commander-in-Chief.”

Joseph Addison’s play Cato, A Tragedy, is quoted as a possible source for the famed words recited as Hale was about to be executed.  The play was very popular among the American revolutionary souls, as it dealt with Cato’s specific conflict with the tyranny of Julius Caesar, and in general with man’s role in deciding the value of personal freedom and the cost one is willing to pay to be free from an invasive and unjust government.  It was said to have been performed, at General George Washington’s request, for the troops at Valley Forge. The play was written in 1712.

It is hard for me not to think about Mr. Hale’s youth and potential. I wonder what might have been – what might he have accomplished with a longer life?  After all, this was a man who believed that women should be given the same access to education as men, and was willing to act on his belief, regardless of the fact that at the time, his opinions were in the minority; thus he would arrive at school two hours earlier than the official start of school, in order to offer girls a chance to study between five and seven, in the morning.  Can you imagine how this kind of forward thinking might have impacted the new nation?

The battle his life was taken for, was lost by the Americans, but eventually we did win the war and inherited the courageous legacy of a young man who thought the hope of this nation was worth fighting for – both in life and in death. Nathan Hale reminds me that it is my fight, not someone else’s.   We must be engaged!

The current Homestead, where the photographs shared in this article were taken, is the second house built on this ground by Richard Hale, Nathan Hale’s father, and saved from obscurity by George Dudley Seymour, who in 1914 purchased the home and began to restore it as a place associated with an American hero.

I must add, for those of you who may feel inspired to either visit the house or do further reading that there is most assuredly an over emphasis on the notion of the environment being haunted – I would say either a way to prolong to the tourist season into the fall or the influence of New England and her witch trials (there is a family connection to the Salem trials) and headless horsemen, and so on; however, do overlook this and instead focus on the impact such a young man made with his sacrifice to the birth of a nation. 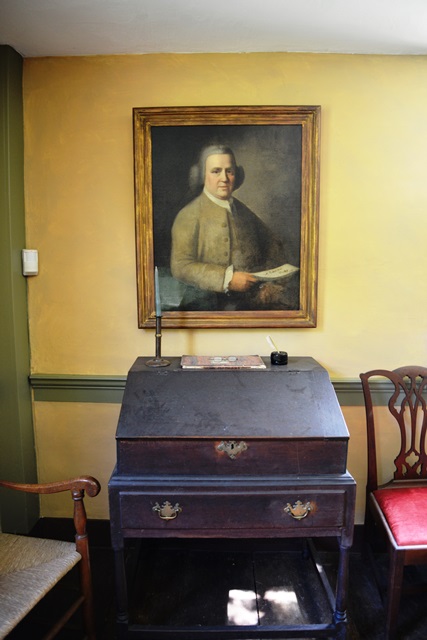 Deacon Richard Hale, under his desk 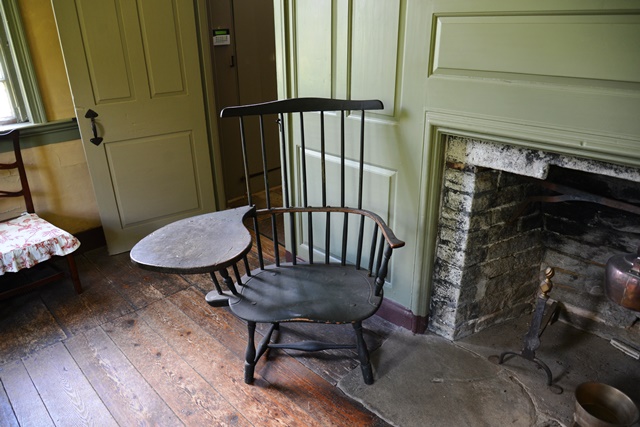 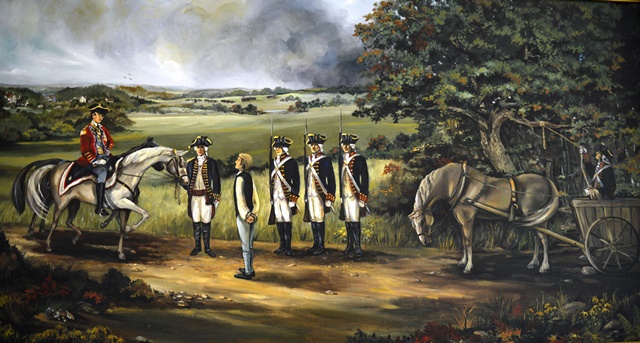 A painting of Hale getting ready to be hung,  Last Hour of Nathan Hale, by Rita Flavey, what struck me, was how much he looks like a young boy. 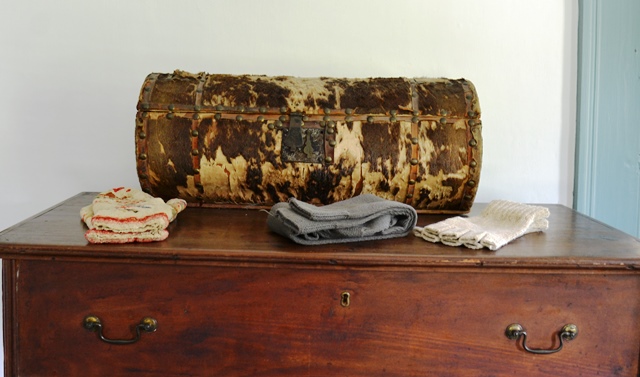 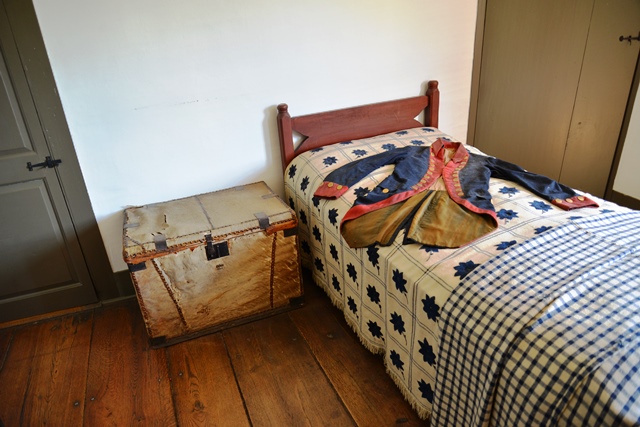 His trunk and jacket, retrieved by the family after his death – yes, it took a great deal of self-control not to reach out and try to at least touch the jacket. 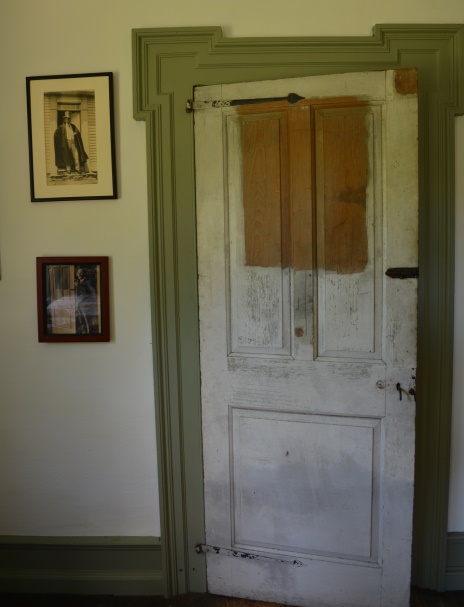 The door has an outline of Nathan Hale in silhouette 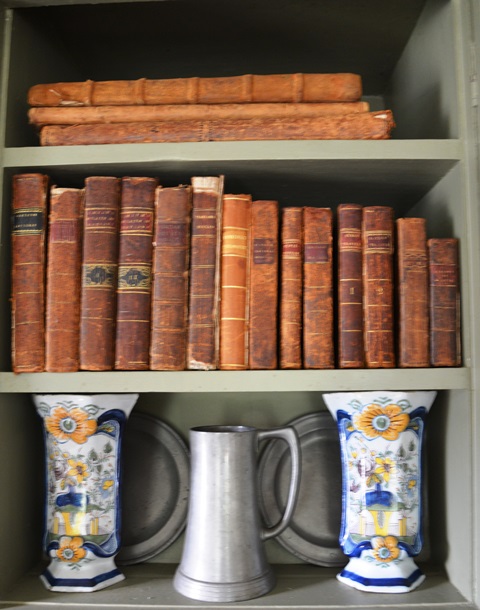 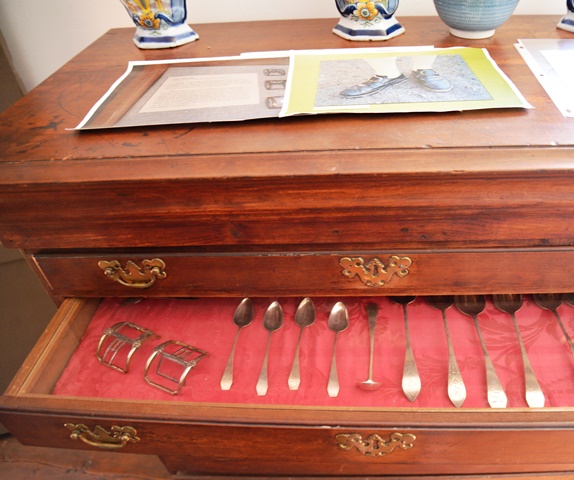 Family silver, including the silver shoe buckles that belonged to Nathan Hale 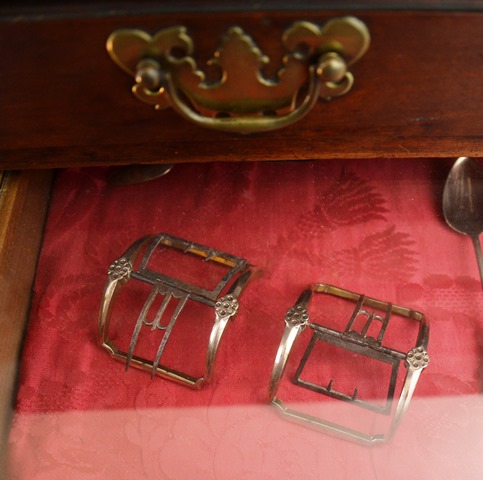 “Captain Hale changed his uniform for a plain suit of citizen’s brown clothes, with a round, broad-brimmed hat, assuming the character of a Dutch schoolmaster, leaving only the other clothes, commission and papers with me, and also his silver shoe buckles, saying they wouldn’t comport with his character as schoolmaster. He had nearly executed his mission when he was stopped between the lines of the two armies, recognized and betrayed.” 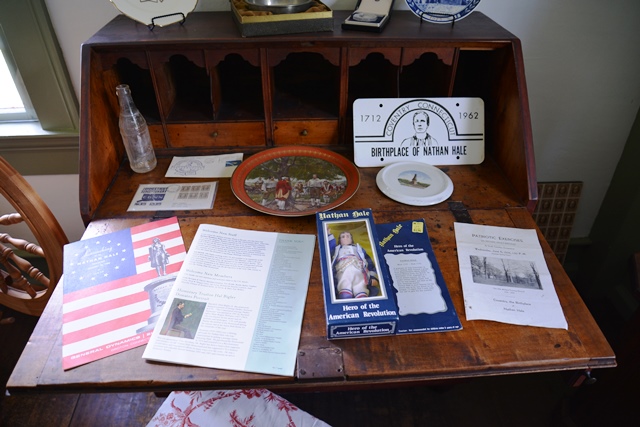 How do we preserve a legacy? 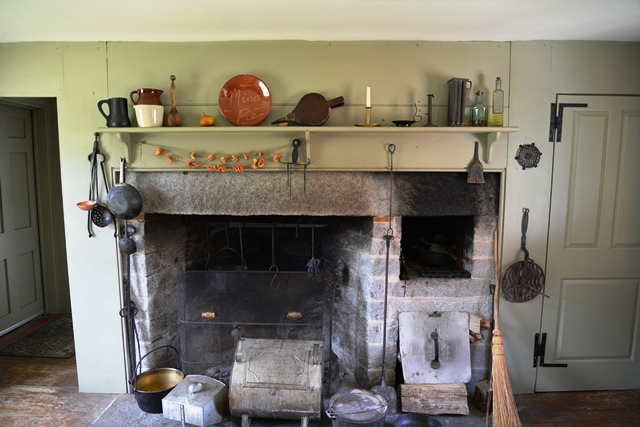 Can you imagine having to cook dinner here? 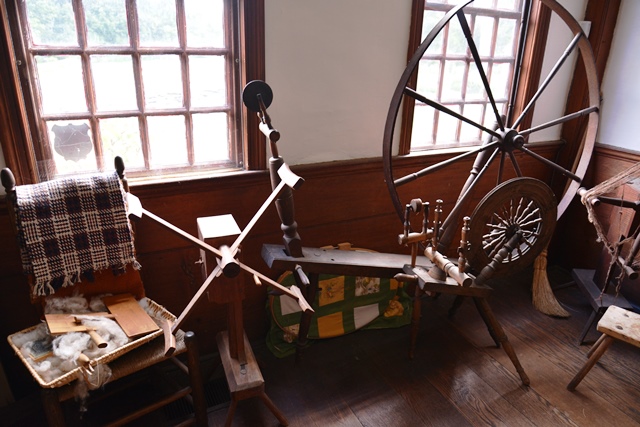 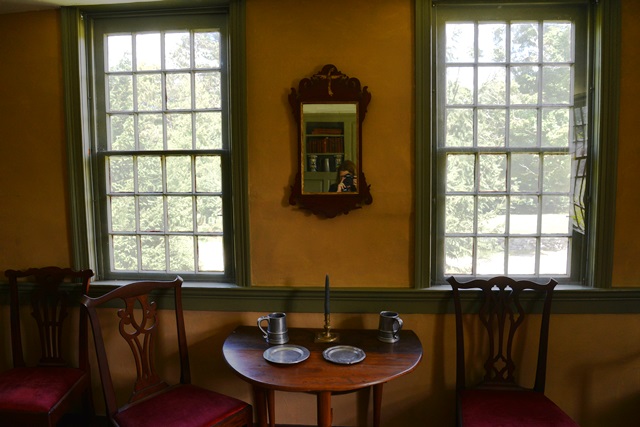 The prized mirror – yes, I got in the picture. 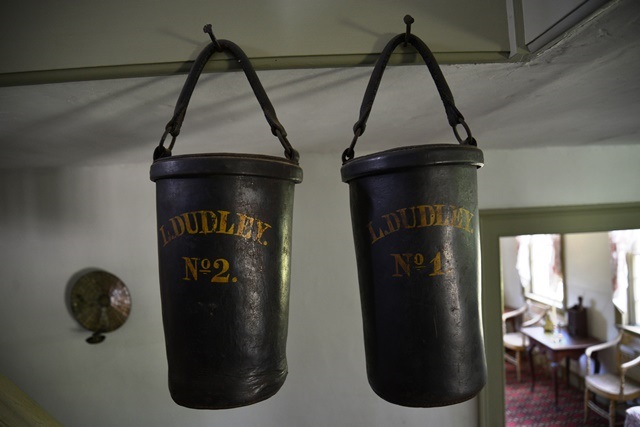 Firefighting buckets – one for water the other for sand 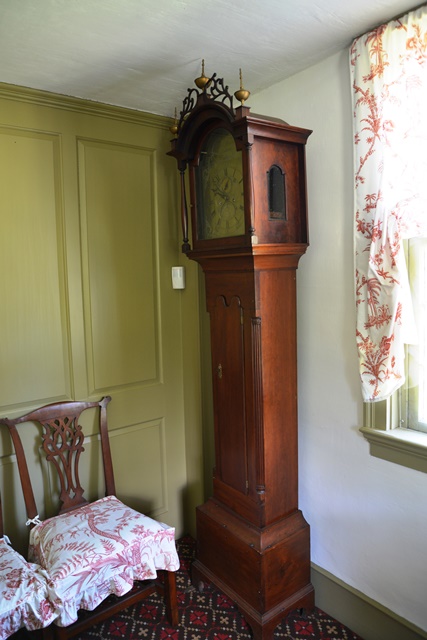 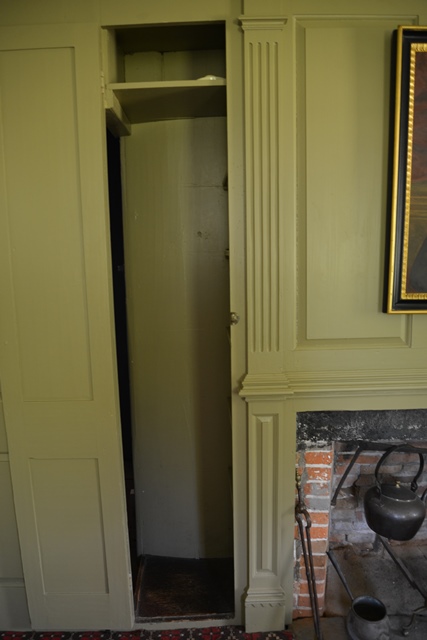 The house indeed has a secret passage! 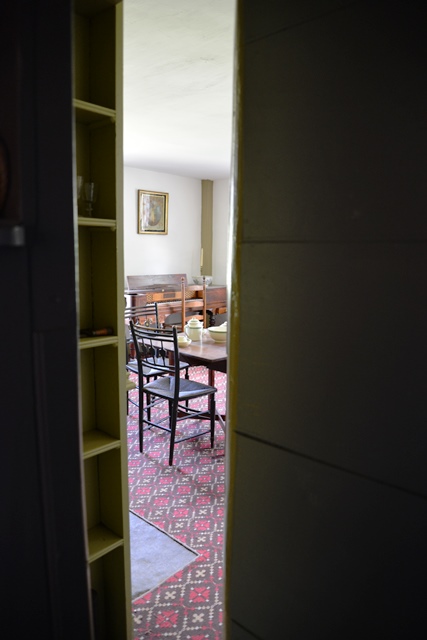 The view from the secret passage 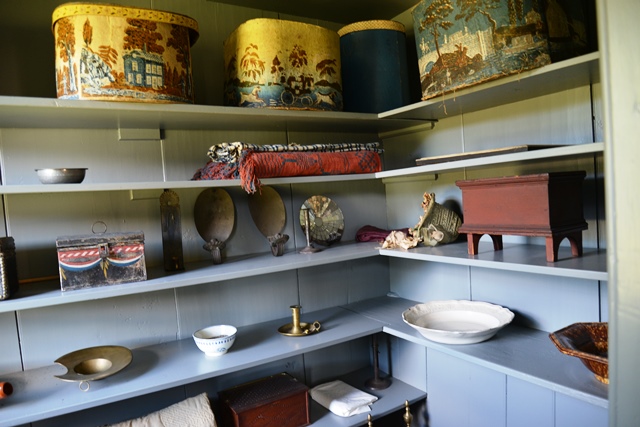 Unusual for homes in New England, still, a large walk in closet 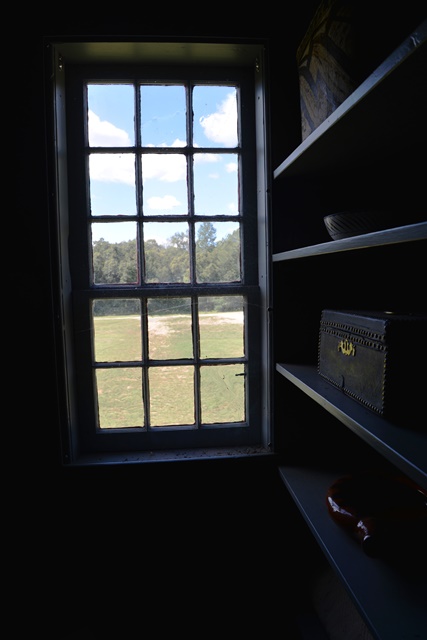 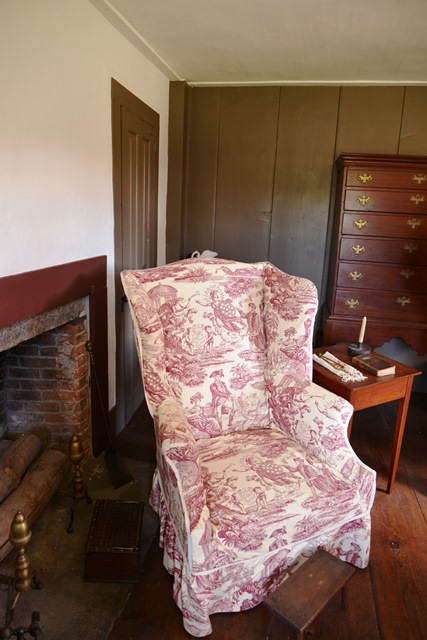 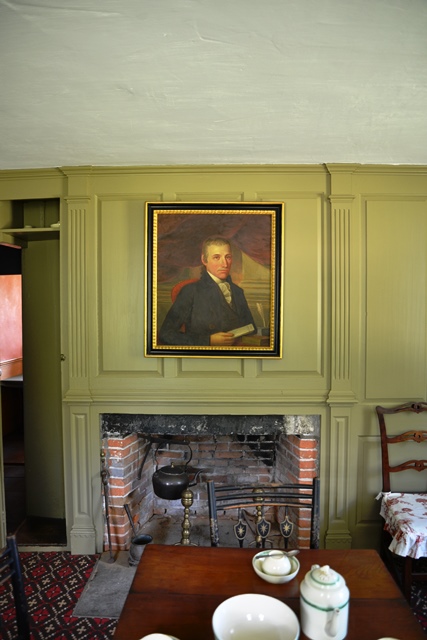 John Hale, Nathan’s Great – Great Grandfather, the Puritan Minister who once supported and then renounced the Salem witch trials of 1692 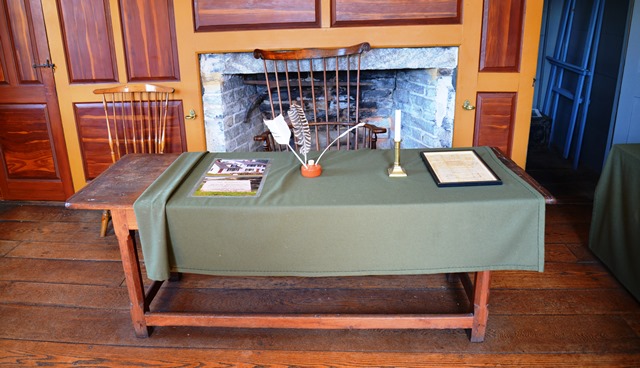