Are you a Tortoise or Hare?

“Do you not know that in a race all the runners run, but only one gets the prize? Run in such a way as to get the prize.” 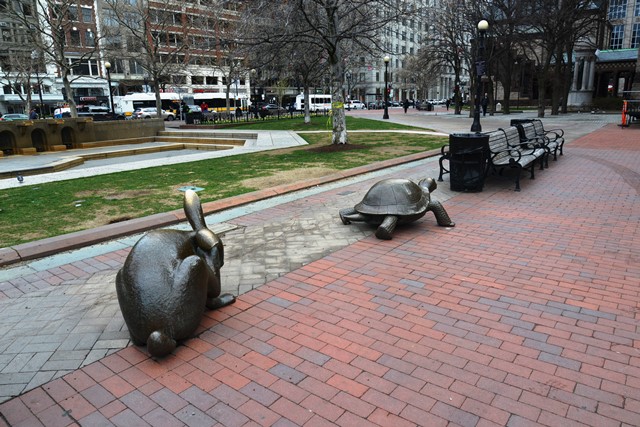 Walking the streets of Boston, I happened upon this enchanting public sculpture, in Copley Square, depicting the Tortoise and the Hare, from Aesop’s Fable; a perfect View from the Road.

I know sometimes the tortoise in us can feel quite overwhelmed by the hare out there, but slow and steady really does win the race – hang in there!

In case it has been a while, since you heard this tale, here it is, courtesy of East of the Web:

“The Tortoise and the Hare” 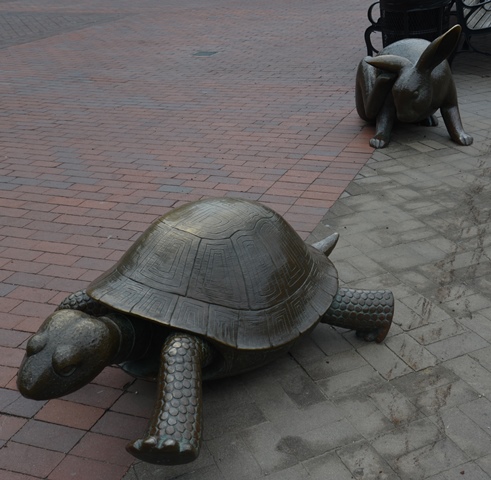 The Hare was once boasting of his speed before the other animals. “I have never yet been beaten,” said he, “when I put forth my full speed. I challenge any one here to race with me.”

The Tortoise said quietly, “I accept your challenge.”

“That is a good joke,” said the Hare; “I could dance round you all the way.”

“Keep your boasting till you’ve won,” answered the Tortoise. “Shall we race?”

So a course was fixed and a start was made. The Hare darted almost out of sight at once, but soon stopped and, to show his contempt for the Tortoise, lay down to have a nap. The Tortoise plodded on and plodded on, and when the Hare awoke from his nap, he saw the Tortoise just near the winning-post and could not run up in time to save the race.

Then the Tortoise said: “Slow but steady progress wins the race.”