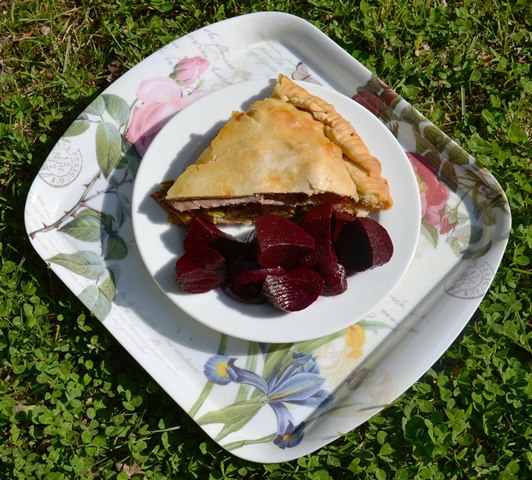 My first memories of a “real” delicatessen are in California, going into Canter’s Deli that was open 24 hours a day! The deli had enough neon to belong in Los Angeles and enough of everything else – from good food to ambiance – to be a Jewish deli; however, I do not remember them having pickled beets.  Though oddly, our journey to pickled beets, becoming a staple in my refrigerator, did begin with the movies, which sort of brings us back to Los Angeles.

I have always liked beets, whether roasted, boiled or pickled; but it was not until The Deli Man Movie, which I most highly recommend, started us on this journey of exploring delis, did I decide that I needed to bring pickled beets, into our life, on a full time basis.

We actually went to Kenny and Ziggy’s, in Houston, whose owner, Ziggy, is prominently featured in the film, excellent food, with an insanely outrageously, wonderfully delicious, cheesecake!  The problem was once we had their cheesecake, our curiosity was peeked – had we found the most perfect of cheesecakes or should we keep looking?

Looking won out, and our cheesecake tastings led us to Junior’s, which is not only in New York City, but also in Boca Raton, the 6th borough; and they do serve a very good cheesecake, and lemon cake, and coconut cake . . . but, if you go in for a meal, soon after you are seated, the wait staff appears with two small dishes of pickles!  They bring you a dish with pickled cabbage, two different kinds of pickled cucumbers, and a second dish with pickled beets!

I am sure there must be recipe out there for Junior’s beets, which alone are worth a trip to the deli, but I do not have one, thus I went searching through various cookbooks, and though I did not quite find something that sounded like Junior’s, with a little bit of this and little bit of that, I have come up with a recipe to share with you.

While I also pickle cauliflower with carrots, I do not can them, rather I put them in an air-tight container in the refrigerator, and I now follow this practice with the beets. I make enough to fill the container, which will last for a couple of weeks, depending on menus and travel; and maybe a few to share.

These beets are great as part of an appetizer course, an actual side dish, a snack (at least in our house), or a nice accompaniment to a sandwich.

I would not say that they are labor intensive, but they do require various steps, thus while it is tempting to start them on the day you do your marketing, wait – though not too long, as the fresher they are to start, the better the end product. Let me add, that as I do not yet use beet tops, for anything other than to feed the animals, I decided once to make the pickled beets using the bare beets, as there was almost a dollar difference in the price.  I must say, the beets with their tops are better, I think fresher.

Water – enough to cover the Beets

Wash the beets well. Put them in a deep sauce pan, with whole spices, and bring to a boil.  Let them cook until you can barely pierce the beet.  I like the beets firm, and we are not done cooking them, so you will have to judge how soft you like them – it may take you a couple of times making them, before you know.

Remove the beets from the water, which you will reserve, and let the beets cool to the touch. Push the skins off, rinse the beets well, and then either slice or quarter the beets.  Strain the water the beets were cooked in, and put it back on the stove, bring to a boil, and add the rest of the ingredients, let the pickling syrup cook for about fifteen minutes.  To taste the pickling syrup, remove a tablespoon of it, and let it cool to room temperature; this is the best time to adjust the taste – you may like a bit sweeter or spicier; add extra ingredients in very small amounts, until you find what appeals to you.

When you have a taste that you like, return the cut beets to the pan, bring it back up to a boil, and let it cook for about five minutes. Turn off the heat, let the beets cool, and then put them in a covered container and refrigerate.