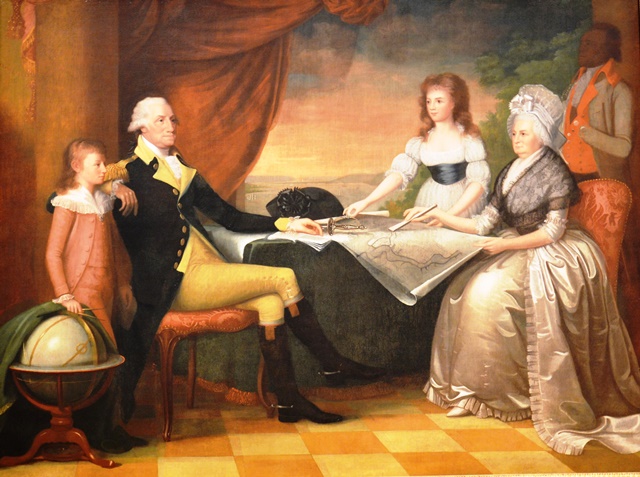 In honor of our Nation’s birthday, I wish you a Happy 4th of July and I share with you a portrait of our first, First Family!

One of the many things to love and celebrate, about America, is our free access to the beauty of art! I hope you have a moment to stop and look up today, in wonder and gratitude at those brave men and women who sacrificed so much that we may enjoy all that is these remarkable United States. May God bless America for ever more.

“The Washington Family by Edward Savage is a life-sized group portrait of U.S. President George Washington, First Lady Martha Washington, two of her grandchildren and a servant or slave. Based on life studies made early in Washington’s presidency, Savage began work on the oil painting in New York City during 1789–1790 and later completed it in Philadelphia during 1795–1796. The National Gallery of Art in Washington, D.C., presently displays the large painting.

The image was a famous one in the 19th century. Prints were mass-produced by Savage beginning in 1798, and by John Sartain in 1840. Washington himself ordered four prints of Savage’s engraving, hanging one in the family dining room at Mount Vernon. The Library of Congress holds in its collections a print of a color engraving that Savage and Robert Wilkinson published in London in 1798.

The northerly direction to the left to which a magnetic compass on the base of a globe points and topographical details of the view indicate that the family is on the west bank of the Potomac River at Mount Vernon, occupying an idealized rendering of the portico that Washington designed for the house.[1] Shown are Martha’s grandson George Washington Parke Custis (called “Wash” or “Washy”), George Washington, Martha’s granddaughter Eleanor Parke Custis (called “Nelly”), Martha and a black servant of uncertain identity (perhaps the enslaved Christopher Sheels, William (Billy) Lee or Austin).

Holding a caliper, young George’s right hand rests near the top of the globe, which lacks geographical markings. A museum’s description interprets this portion of the scene as representing American hopes for rising global significance.

A researcher has found that the perspective of the painting terminates at George Washington’s heart.”