One of Hemingway’s Cat 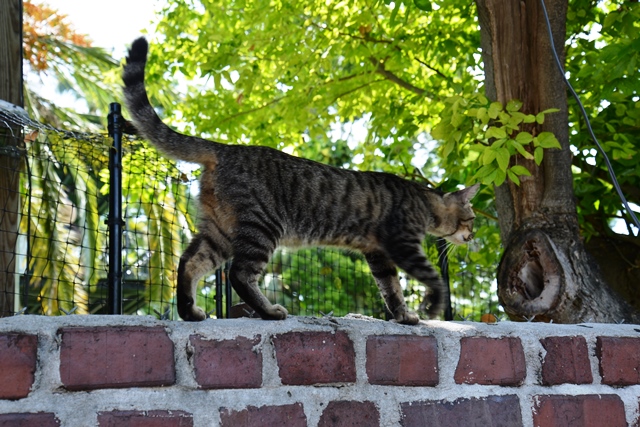 We toured Ernest Hemingway’s house, in Key West, Florida, many years ago; not on our first visit to the Keys, in 1991, but on one of many return visits with a little extra money, to cover the price of admission. Not all stops that we make would I recommend, but this is a historical house worth stopping to see; especially if you appreciate his work, as much as I do.

One of the many interesting elements, in the house, is the many cats, that freely roam both the grounds and the interior of the home.

The story of Hemingway’s six-toed, polydactyl, cats begins with Snow White, a white cat gifted to the author by a ship captain. Normally, cats have five toes on their front paws and four on their back paws; but of the 40 to 50 cats that inhabit the Hemingway house, many direct decedents of Snow White,

“It was on the advice of John Dos Passos, a fellow member of the “Lost Generation” of ex patriate artists and writers populating Paris during the 1920s, that Hemingway was first prompted to visit Key West. Hemingway did not go directly to South Florida from Paris, but rather arrived through Havana, Cuba—a city and country that would prove to be critically important in Hemingway’s later personal and professional life. Upon his arrival in Key West in April 1928, the first order of business was to locate the new Ford Roadster that Pauline Hemingway’s wealthy Uncle Gus had so generously purchased for the newlywed couple. Because the car had been delayed in transit, the Ford dealership insisted that they take up residence in an apartment located above the showroom on Simonton Street. Ernest and Pauline accepted the offer, and he resumed work on a war story he had started on the ocean passage to Key West. Hemingway continued his Paris habits of writing during the early mornings, and taking time to explore his surroundings in the afternoons. The Hemingways spent three weeks waiting for their car, and it was during this very brief three-week interlude that Ernest—amazingly—finished the partially autobiographical novel about the First World War, “A Farewell To Arms.”

Soon after arrival, Hemingway made the acquaintance of Charles Thompson, who ran the local hardware store. Charles Thompson introduced Hemingway to the exciting world of big game sport fishing, and a long friendship was born. Charles and his wife Lorine entertained the Hemingways at their home on Fleming Street. Lorine Thompson proved to be as friendly and gracious as her husband Charles, and it was during those early days in Key West she and Pauline forged a friendship that would endure for the rest of their lives. Both Ernest and Pauline grew to love Key West and its inhabitants, and soon decided to look for a permanent residence. After two seasons in Key West, Pauline’s Uncle Gus purchased the house on Whitehead Street for them in 1931.

The Hemingway home was built in 1851 in the Spanish Colonial style, and was constructed of native rock hewn from the grounds. The home was in great disrepair when it the Hemingways took ownership, but both Ernest and Pauline could see beyond the rubble and ruin, and appreciated the grand architecture and stateliness of the home. The massive restoration and remodeling they undertook in the early 1930’s turned the home into the National Historical Landmark that thousands of tourists visit and enjoy today.

A unique and extraordinary feature of the grounds is the pool, built in 1937-38, at the staggering cost of $20,000. It was the first in-ground pool in Key West, and the only pool within 100 miles. The exhorbitant construction costs once prompted Hemingway to take a penny from his pocket, press it into the wet cement of the surrounding patio, and announce jokingly, “Here, take the last penny I’ve got!” Tourists are invited to look for the penny, still embedded between flagstones at the north end of the pool.

The Hemingways’ personal touches still abound throughout the house. Many of the unique furnishings are European antiques collected during their stay on the continent. The trophy mounts and skins were souvenirs of the Hemingways’ African safaris and numerous hunting expeditions in the American west. Ernest’s presence can still be felt in his studio where he produced some of his most well-known works. In addition, a very visible and living link to the past are the descendants of Hemingway’s cats. The story goes that Hemingway made the acquaintance of a sea captain who owned an unusual six-toed tomcat, which captured Ernest’s fancy. Upon his departure from Key West, the captain presented the cat to Hemingway. Today many of the numerous cats that inhabit the grounds still possess the unusual six toes.

Ernest’s friends Charles Thompson, Joe Russell (also known as Sloppy Joe), and Capt. Eddie “Bra” Saunders, together with his old Paris friends became known in Key West as “The Mob.” The Mob would go fishing in the Dry Tortugas, Bimini, and Cuba for days and weeks at a time in pursuit of giant tuna and marlin. Everyone in The Mob had a nickname, and Hemingway was often referred to by his friends and family during this time was “Papa”—it was a moniker that eventually stuck with him throughout his life. Hemingway’s Key West was a town unlike any place he ever experienced. It was filled with interesting people, ranging from well-to-do businessmen and lawyers, to down-on-their-luck fishermen, to shipwreck salvagers. Throughout his career, Hemingway freely used the people and places he encountered in his literary works, and many Key Westers appear as characters in his novel “To Have and Have Not,” a novel about Key West during the Great Depression.

Ernest and Pauline divorced in 1940, Hemingway took up residence in Cuba with his third wife, Martha Gellhorn. He continued to visit Key West during the 40’s and 50’s until death in 1961. Throughout the years, Key West has been home to many writers and artists, but none whose presence and influence is as profound as Ernest Hemingway’s”