Kate was driving home, and she mentioned that she was bringing me a surprise. I asked a few questions, none of which were answered, and in my mind I settled on something like guava pastries or cheesecake. 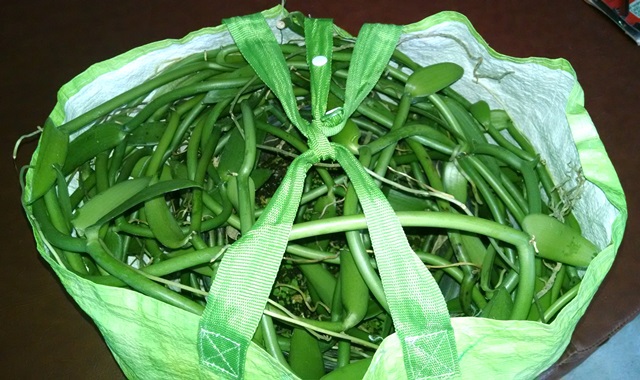 When she arrived, she handed me the above package. Kate had carried this bundle on an airplane.  I looked at her in a small state of shock, not wanting to presume too much; she was glowing with happiness and excitement, and could no longer contain herself: “It is a vanilla orchid!”

No, no way, oh my, how did you do this, how did you get it on the plane, where did you find it, oh my gosh . . . I blabbered on, as I began to unwind the plant, that arrived with literally only one torn leaf.

Honestly, I think if at all possible, she was more excited about this orchid than I was, and I was thrilled. She began talking to me about the plant, its care, and its previous home, and soon we made plans on where we would put it and what we needed to do to care for it.

What a spectacular surprise, not that I would not have been very happy with pastries, but this surprise, which is now happily growing in its new home, has become something we both check, on almost a daily basis; and every time I look at, I think of the moment I first saw it.

When I think of a surprise, I always think of a surprise being good; but looking up the definition of the word surprise – well was actually surprising. According to Merriam-Webster, a surprise is “an attack made without warning, a taking unawares, something that surprises, the feeling caused by something unexpected or unusual.”  Maybe we need to re-think the whole notion of the term “surprise birthday party”?

In general, I feel like it is not the actual surprise that matters, as much as the fact that there is a surprise; the idea that someone spent time thinking about me, is in point of fact quite touching and makes me very happy, at least normally.

For a while now, I have been pestering Al, our neighbor, to show me his town – the town we all live in, but that he is master of, at least in my eyes.

On a beautiful Saturday afternoon, shortly after Kate had gotten the charcoal briquettes glowing, planning to eat, before seriously getting into her carpentry projects, Al, popped over and surprised me, by suggesting that it was a good day for my private, guided tour; I was thrilled!

With every ounce of respect and appreciation, we call him Mr. 911, he is married to Mrs. 911, though Mr. and Mrs. 411, would also be quite appropriate, as they always seems to have the answer to whatever question we may have, and generously avail themselves to us.

Soon the four of us were off to see places that I had no idea existed and other places we had driven by before, but had no idea of their significances. Al kindly stopped, to allow me to hop out of the car and snap photographs, as desired and shared antidotes about this place we call home, as only he could.

As we drove around the town, I reminded myself of the fact that I knew that sunny mid-70’s would not last, nevertheless, I still felt rather oddly at home, which was also a nice surprise.

The next day, we went over to thank Al and Lois for our tour and to express how much we had enjoyed our time together. We all began chatting, as we do, and eventually I ran my thoughts by them, as we do, wanting their perspective, on a situation that had both surprised me and made me sad.

As I shared my story, they asked all of the appropriate questions, trying to understand what had happened, offered comforting words, but too reached the same conclusion – I was disheartened by people’s behavior that I could not explain, especially as their unkind actions were so needless.

The odd thing, to me, was that I was actually surprised by what had happened; but somehow did not feel the way surprises normally make me feel.

When we came home, as I headed toward the kitchen, I was stopped by another surprise, which had made me feel quite different.

Recently, my friend, Linda, one of the most loyal people I have the honor of knowing and long-term supporter of these pages, sent us a surprise. We happened to find the box, on an ordinary Thursday, sitting on the side porch, after having spent time with – Al.

When I saw the box, I was surprised; we had not ordered anything and there was no particular occasion upon us. I took the box in the house, and opened it to find a stunning piece of art.  It was an extraordinary American flag, made from metal, worked in such a way to appear to be in motion; to me it captures the struggles our nation has experienced and endured.  I was speechless. 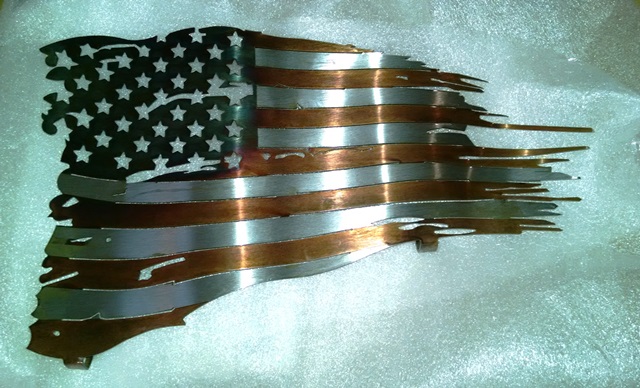 I looked at the return address and then inside the box, trying to find who had sent me this wonderful surprise; but there was no name attached to the gift. I went back outside to show it to Kate and Al and asked if either of them had sent it, they both said no, but marveled at it, just as I had – Al asking where I would be hanging it – it deserved a special place.

Reluctantly, only because I did not want to offend the sender, if the gesture was meant to be kept private, I turned to social media, to find who I might be able to thank. Fortunately, Linda was not upset that I posted the picture, of the gift, and graciously received our thanks.

Linda’s gift was what I think of, when thinking of a surprise. A surprise should be something nice that makes someone feel loved, or at the very least liked.

Trying to process how I felt about the sad surprise, and why people would do such a thing, oddly steered me away from sorrow and into gratitude.

I started to think about all of the very sweet and unexpected surprises that had come into our life, at Christmas time, and how this generous spirit of love had continued to be demonstrated by so many throughout the year.

I mean we literally got a wooden box of gourmet goodies, from the Barros-Jardines Family that was filled with delicious and exotic treats, which I would never buy for myself; and while that would be reason enough to have loved the gift and felt grateful, there was an added element to that gift, that I am pretty sure I have not even mentioned to them – 84 Charring Cross Road.  It was literally a wood box, not a Styrofoam cooler or cardboard container, a wood box, something like the kind of box one might have filled with food stuffs, after World War II, to send to the employees of your favorite book store, in England, where food shortages abounded.  Yes, I still have the box, and am pretty sure I will always have it, unless I think of something spectacular to do with it, worthy of what it means to me, worthy of how it reminds me of these amazing people who are constantly surprising us with so much – like allowing us to be a part of their families most important milestones – so many happy birthdays and so much more.

Suddenly, I started to think of all of the handmade cards Nancy has sent us through the years, with personalized envelopes, that are always bursting with love and joy! I have never known how I got lucky enough to get on her mailing list, but every card is such a wonderfully glorious surprise of love; it is nice to be loved by a person with such a kind and thoughtful heart.

Or what about opening a box, from Paul, with something equally spectacular like a handmade cutting board, inlaid with turquoise, made of wood from Hawaii, and carved in such a beautiful fluid manner, that it takes your breath away – that for a moment forces you to debate how you are going to tell him that you are never going to use it for its intended purpose, because you know it is a piece of art, but figure he and Alycia will one day visit, and see his work on the wall, and figure out that nothing was ever cut on it, a true dilemma, –  but oh my what a wonderful surprise. 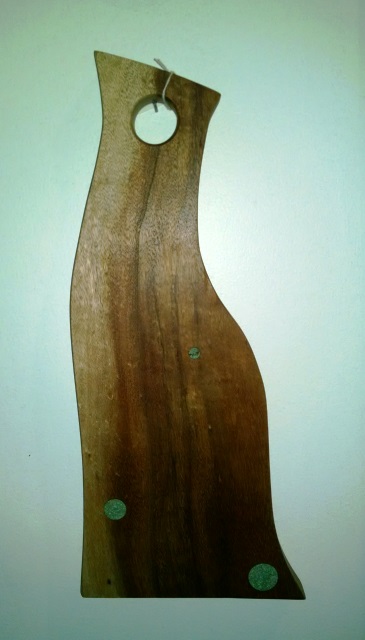 (My photograph does not do justice to this piece, I urge you to contact Paul, on these pages to see samples of his work – perhaps you can talk him into creating a piece for you!)

There have been many nice surprises, like Doug congratulating me on our ten year milestone, and sharing the website with his world, being invited to Mike and Julia’s home, finding a warm and welcoming church, and Al knocking on the door with a t-shirt, which was ordered in response to a conversation about Cuba, where I had to admit I had never actually been to Cuba, but where Kate chimed in that I was conceived in Cuba, and thus with a smiling face, he hands me a t-shirt that says: Made in Cuba! 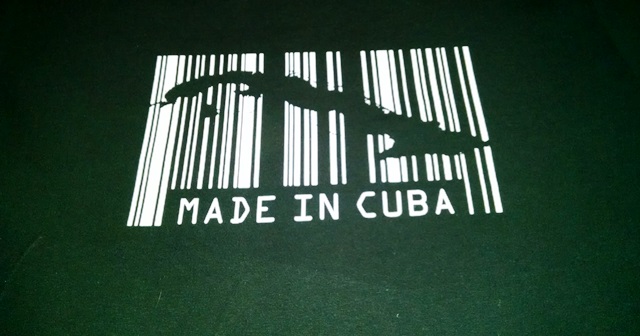 Yes, surprises are not always good; and frankly I only like the good surprises. But, as I walked out to the mailbox this week, I bent over and picked up a very red maple leaf.  I was not happy to see the beautiful leaf, because it was a precursor of what is to come, however, twirling the leaf in my hand, made me look up into the bright blue sky and cherish summer, a bit more than I would have, without that not so great surprise.

The unexplainable bad surprise did make me sad, but I have had so many wonderful surprises, like Christine running into the house, in the three minutes she had, hugging me jubilantly and telling me: “You were right, I love driving!” I am going to focus on the good surprises, I hope you can too.  That Is All For Now. 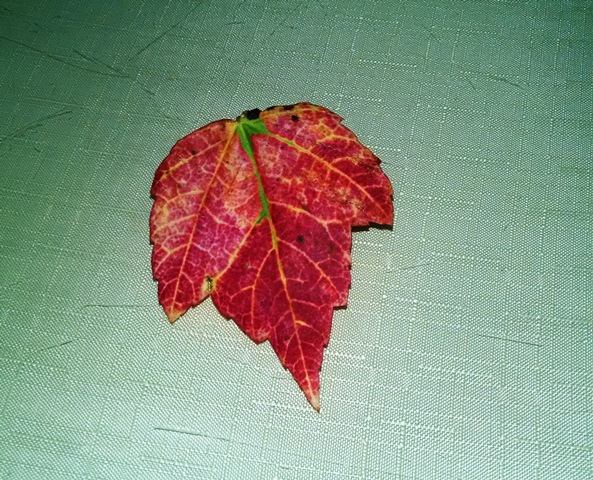