What Do You See

Do you need a closer look? I did. In fact, as I drove through Boston, a city I have been visiting for a life time, having lived in Brockton, as a child, and then making my way to Boston  again, before Hannah was born, and then repeatedly since that time.  On this day, as I drove through Boston, I felt an odd urgency – I needed to take a closer look, while I still could. 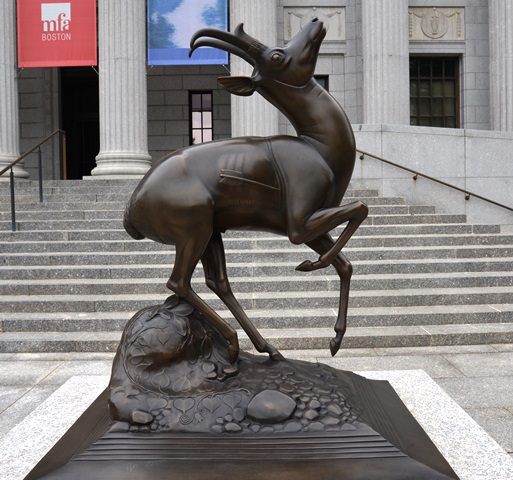 The sculptures you are seeing are in front of the rear entrance, to the Boston Museum of Art. The pair are both by American artist, Paul Manship (1885-1966), whose work, Prometheus, sits in front of Rockefeller Center, in New York City.  The piece closest to the right is called Pronghorn Antelope, modeled 1917, cast in 2002, in bronze; while the piece farther to the left is Indian Hunter modeled 1917, cast in 2002, also in bronze.  The pair was obviously made to be displayed together.

As I drew closer, my first thought was that I had seen these two sculptures before, though I had not photograph them, as the subject matter does not particularly interest me; not because I do not love deer, I do, and am always quite thrilled when I seem them alive and in nature, but I am not interested in hunting deer. (That statement is not political, rather personal.  I do not want to go hunting for deer or anything else.)

This deer has been wounded by the hunter. I walked around the statue, deciding I best photograph it; and wanderd who might find this piece of public art objectionable, in this day and age. 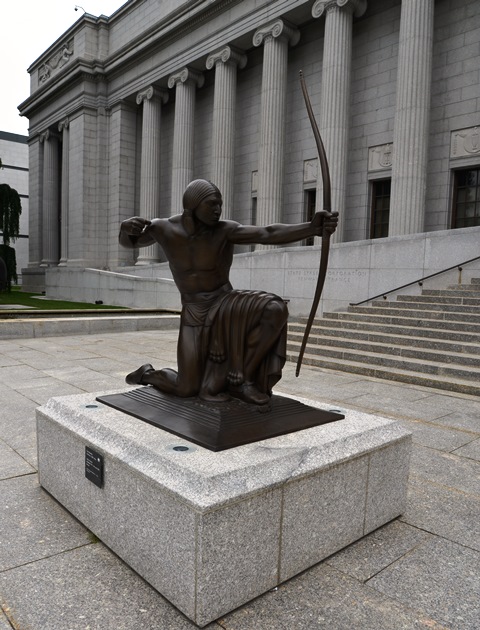 Initially, I thought the piece is safe, because it depicts a Native American hunter not say an Anglo Saxon hunter, like Buffalo Bill or President Theodore Roosevelt; but then it occurred to me that vegans and vegetarians and animal rights activist may well take offense at this deer being killed. I took more pictures of the deer.

I then walked over to the hunter, and noticed the paws that draped his legs, what did they belong to, I wondered? A large cat, of some sort – maybe a mountain lion or puma – I am not sure; but suddenly I thought this display is in trouble, after all.  Not only is this hunter depicted shooting the poor deer, but he obviously has another kill hanging over his leg.  What does the double kill mean?  Perhaps, one could justify the deer as food, but the cat? 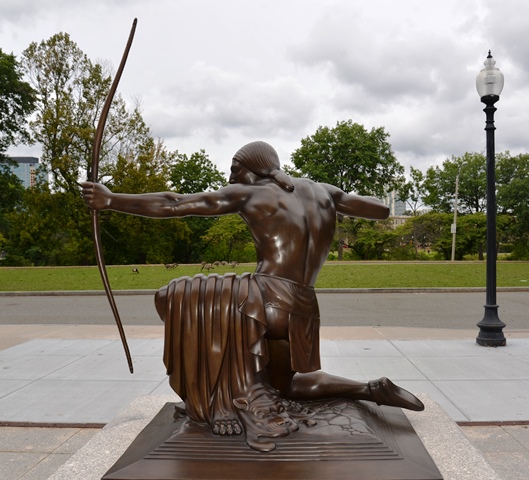 Forgetting for a second that I may well be observing an endangered object – public art; I actually began admiring the movement of the sculptures, as well as how smoothly the poor dead cat draped, over the Indians leg, and the sleekness of both statues. I saw beauty in both pieces, even though I did not like the subject they portrayed.  I then thought about the people who had purchased the pieces and donated them to the museum, Ann and Graham Gund, and in case you are wondering, Graham is a native of Cleveland, Ohio, an architect, collector of modern art, and graduate of both Kenyon College and Harvard University, and finally I wondered if Pronghorn Antelope and the Indian Hunter would survive this current “book burning” that is overtaking our society.

I do not want to live in a world where public art is being assaulted by any mob – right, left, or center, white, black, Latin, Asian, or Middle Eastern, rich, poor, or middle class, protestant, catholic, Muslim, Jewish, Buddhist, agnostic, or atheist, short, tall, fat, or thin, below average IQ or above average IQ, born in America, immigrant, just visiting, or illegal alien, young, middle aged, old, or dead, brown, blue, or green eyes, bald, blonde, or brunette, right handed, left handed, or opposable thumb texter, well-educated or never read a book in their life, carnivores, vegetarians, por-pescado, or vegans.

You name it, today, in America, we have plenty to separate us from one another; and it does not take much to come up with even more reasons to be divided; but I keep wondering if there might not be some reason to come together?

Boston is a city well adorned with public art; it is one of the oldest cities in the United States, thus they have a lot of history to cover and people to commemorate.

Is it possible to imagine some well-meaning soul, thinking they should erect a public monument to commemorate something like Robert McCloskey brilliant children’s book Make Way For Ducklings?  Might that be a good idea?  Would it be worth using public funds to maintain a set of ducklings, following close behind their mother, where Bostonians and visitors alike, would come across the sculpture, stop and smile – whether they had read the book or not?  Could the display be put in a public park, where strangers might engage with one another, offer to take pictures of each other around the ducks, and end their encounter by wishing each other well?  Might such a display help promote reading and art and thinking?

Or would the sculptures somehow be viewed as subversive – why Robert McCloskey’s book? Why honor a book written by a white man, why focus on ducks, or why a children’s book?  I started to feel very sad, not a new feeling of late; but as I walked away from the hunter and his deer, I started to think about the beloved ducks that live in the Commons (my link below) and decided if anyone comes after those ducks, I am hitting the picket lines; but I am not hitting any person or defacing any statues of chickens or turkeys.

Public art and public building projects speak of the society that created them; and if we so choose, we can use what they left to learn about them and us.

When I walked through the Colosseum in Rome, it never occurred to me that it should be torn down, because it is a monument to a pagan culture that murdered Christians for sport, torturing poor animals in the mix. Nor did I think that Teotihuacan should be raised because it is the site of people being sacrificed, again to pagan gods, with their hearts being cut out of their bodies, while they were still alive.  I remember being devastated when the Taliban blew up a 2,000 year old statue of the Buddha, in Bamiyan Valley, in Afghanistan in 2001, and not because I am Buddhist or Afghani, but rather because ignorance and intolerance were destroying a piece of art and link to the past forever.  More recently, when ISIS sat about systematically destroying ancient buildings and art, because they did not conform to their religious views; I remember waiting for world outrage and action, but none came and sadly this is where we find ourselves today – our society is taking their cues from the Taliban and ISIS.  Why?

Are there buildings that should be raised? I find that question much harder to answer.  In recent memory, for example, there have homes where particularly evil crimes were committed that have been torn down, an act I have understood; but I have wondered, does tearing down the building actually heal the wound or does it make us forget that we allowed the evil to be perpetrated?

I do not have the answers, but what I do believe is that what we need is a public dialogue that leads to orderly action.

To me, it is an outrage that a statue of President Abraham Lincoln would be disfigured. If you have an issue regarding the President, then state your case and obey the law.  There is no community, in the United States, which does not have a legal way to express your opinions and feelings about public art, and a prescribed set of rules to change anything from a street name to a statue that sits on Maine Street.  I support everyone’s right to write their op-ed pieces, to generate flyers, pass around petitions, attend city council meetings, file a law suit, contact any and all elected officials and put whatever you want to a vote.  However, I do not support the rule of the mob that is now driving our nation.

Before it is too late, we need to find a way to listen to one another, and when it is our turn to speak, we need to present our arguments in such a manner that we enlighten our audience, not insult them and terminate the hope of finding a mutually acceptable solution.

Meanwhile, you do not have to go to Mount Rushmore, but I have been and it was an amazing experience, so please do not vandalize it or make it impassable for those who want to go; and let me tell you Crazy Horse is not finished, so what if instead of working to destroy Mount Rushmore, you set about raising money to finish Crazy Horse, and maybe add whoever it is you think is not being represented.

Maybe I would not buy a sculpture of an Indian shooting a deer or a deer that has been shot, but the great thing about America, is that I can still enjoy them, for free, if I so choose; and if not, I can keep going until I find something I do like or love – yes, those ducks! That is all for now.