“Sears is Now a Penny Stock” I saw the above headline, regarding Sears, and decided I needed to read the story. “In the latest indignity for a once-grand retailer, the share price fell below $1 on Friday for the first time in the company’s history, dropping as much as 15% to 85 cents in midday trading.”

My first memory, of a department store, is from when I was six years old. We had moved back to the States from Puerto Rico, I did not speak a word of English, and someone took us to see the Macy’s Santa, in New York City. I have no idea how the details played out, but I left Macy’s with a small Light Bright! Yes, it was the Santa, at least to me, that we had just seen in the Macy’s Thanksgiving Day Parade; is it any wonder I love that I love Miracle on 34th Street!

I am a brick and mortar shopper; if something must be ordered “on line” it falls to Kate. I love walking, and I do not believe I can ever know a place, unless I walk its streets or in the case of a store, its aisles; and yes, as anyone knows who has read these pages, I love second hand stores. I do love a bargain, but I also love the surprise a second hand store can bring – the unexpected wonder of an item I did not know existed and what I can with it!

When Toys R Us announced it was going out of business, I frequented the store a bit more than I had in the past few years. Oddly, it was not that I was looking for a good sale; rather I was trying to stock up on memories.

My first interaction with Toys R Us was when my family happened to find itself in Columbus, Ohio, and my Uncle Gary took my sister, Joy, and I to the store, for what in my memory world, was the first time. I believe, and welcome being corrected, that I picked out a jack-in-the box; I then remember him taking us ice-skating, in that rather perfect day.

Toys R Us did not come back into my life until my oldest niece was born; I loved going into the store to marvel at their stock and think about what I wish I could buy her, as for most of my life, their prices were a bit of a stretch, on my budget. Nevertheless, to me, walking into the store was like what I imagine Santa’s workshop to be, and in later years, I would go there to buy gifts and then of course the grand nieces and nephews came along, offering me a perfect excuse to make a stop.

In one of my last ventures, into the store, I bravely asked the clerk if there was anything for sale that had their logo on it, he looked at me a bit oddly and then sympathetically said no. Maybe I was not the first middle aged woman who had posed such a question that day.

Yes, yes, yes, their prices were higher than those big box stores we now all frequent, but no one matched their selection. The Toys R Us’, in my world, are now empty buildings, and it still makes me sad when we drive by them, but I have made my peace. Sears, however, is a whole other story.

I will admit, my first thought, as I read this news, about the price drop in Sears stock, was should I buy Sears stock? But that thought only lasted about a second; my memory quickly rushed back to the awe the Sears Catalogue had once inspired in me, and the sheer delight a box from Sears once meant in my life.

I do not know when my Mother received her Sears Credit Card, but I do remember that I first became aware of its magical powers when I was in 9th grade.

The only Sears outlets I remember in Delano, at the time, was one of those store fronts that mostly featured appliances and the like; but that did not matter, because of the Sears and Roebuck Catalogue!

In our world of limited resources, first financially and secondly in terms of actual places we could go to shop, Sears was a life line filled with deliverable wonder.

Sears began its life as a mail order catalogue, in 1892; and until 1989 it was the largest retail establishment in the United States, and was once the nation’s largest employer. What had started as a whim, buying a shipment of unwanted watches and reselling them at a handsome profit, eventually became a go to place for much of America. Regardless of where you lived, Richard Warren Sears, who had once worked for the railroad, understood the value of shipping, and he was willing to ship to the most remote of places; bringing his product to the isolated farmer or rancher or a high schooler living in a small town.

After that Sears credit card came into our life, we started to receive the catalogue, in the mail; it was huge! I remember getting my turn to leaf through the pages, and thinking about not only what I would like, in a dream world, but also about what I wish I could buy for my family, as Christmas gifts; it helped that others had thumbed those pages, making their own notations and turning down the corner of the pages that peeked their interest.

As a true bibliophile, I am well familiar with the wonder that books bring into our lives; oddly the Sears catalogue really did impact my world, at least for a season, with the hope and inspiration of any a good book. It provided me an opportunity to not only imagine how a pair of shoes might look on me, but to dream about where I could go with a suitcase on wheels!

When we moved from Delano, into the suburbs of Los Angeles, the isolation was gone, and stores and malls abounded; but Sears was still a go to place, thanks to that credit card. Thus if I needed a special dress, my senior year of high school, off to Sears we would go; God bless my poor Mother, I cannot imagine how she handled it all, but she did.

I remember, a few years later, when I was off having my own adventures with a couple of friends, on a beach outside of Honolulu, when Sears became our supplier of Famous Amos cookies and camping gear, on someone else’s credit card, yet again – I do feel a bit guilty about those purchases, but I still have the green beach towel – thank you!

The most important purchase, I ever made, on my own Sears credit card was a small, electric, portable typewriter that I bought in Puerto Rico, the year before my father died; I love that little machine, and only gave it up when I could no longer buy the ribbon cartridges, because Sears stopped making them.

I will stop, but how can I not mention the washer and dryer my Mother bought Kate and I when we moved from an apartment to a house, still rented, but a house. They were beautiful, white, new, and made me feel so very grown up. I still love appliances from Sears!

Change is inevitable, I know. While I do not happen to be a fan of so much of the change that is now impacting my life, perhaps a true sign of aging; I am not unaware of the fact the party decorations I used to buy at the Party Store, I now buy for a fraction of the cost, at the Dollar store. I also remember walking into my first Target, and being amazed at the sheer volume of products, and really who can compare with the prices at Walmart?

So here we sit, perhaps on the precipice of another huge change, in our retail world, Sears may be joining the likes of I. Magnin, J. W. Robinsons, Bullocks Wilshire, Buffums, and even Burdines, all wonderful, now gone department stores, that used to allow people like me, to step into those luxurious worlds, and stroll through what was unattainable in reality, but free in my dream world. There was something rather magnificent, about looking through the displays of china and crystal, and imagining how I might one day set my own table; or touching countless displays of sheets and towels, marveling at the colors, combinations, and textures, and learning what one hundred percent cotton was and why it mattered!

I know that one of the many rages today is against consumerism, but I have to say, it is rather delightful to open a beautifully wrapped package; and something even more delightful about having found what you believe to be the perfect gift, and watching someone you love, open their surprise, that you unexpectedly found, as you stepped in from the rain, on a day spent walking the streets of say New York, Miami, Los Angeles, or Chicago.

When the history, of change in retail, in the United States, is written, undoubtedly Amazon will play a significant role in what is happening to those once familiar brick and mortar stores; but it is worth remembering that Sears was actually offering those mail order services, a hundred years before Amazon was even a twinkle in Mr. Bezos eye. That Is All For Now. 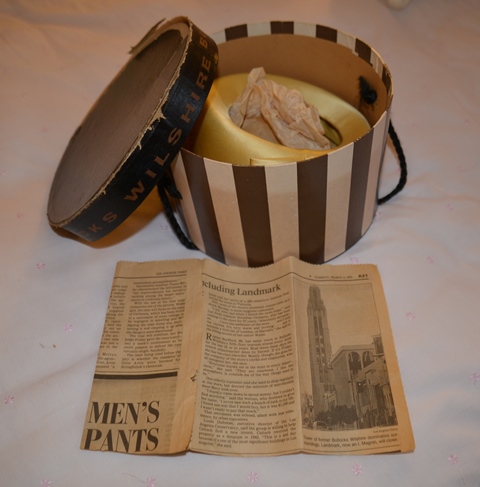