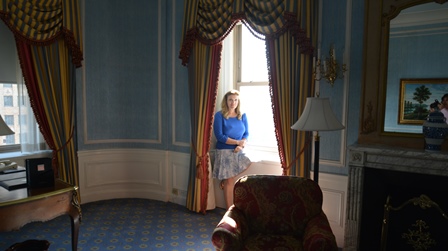 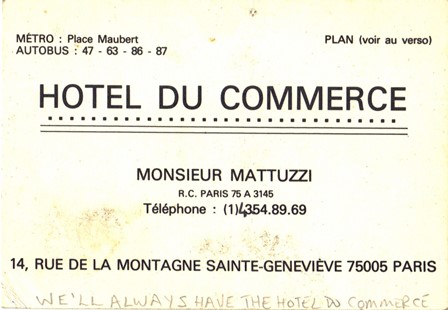 “It was so nice to receive the note, from the Waldorf Astoria; it was a place where we spent so much time. Coming in from Baldwin, with Milton working on 5th Avenue and 48th Street, we would meet every Friday night at the Waldorf Astoria, after a cocktail, we would go to dinner and then on to the ballet, opera, or theater, and at the end of the evening ride home together.  It means even more to me now, knowing you have stayed there.”

Recently, after having spent the night at a rather famous hotel, in the south, I approached the front desk, and asked the clerk for hotel stationary; there had been none in the room, and given the history of this establishment, I felt that there should be, but I was wrong.

The clerk was baffled, and it was not a language issue. She had no idea what hotel stationary was, and when I finally explained sufficiently that she felt able to proffer help, her suggestion was that I walk up the street, to a Publix grocery store, where she felt sure they would sell writing paper.

I was crushed. Not only was I looking forward to sitting outside, in front of the hotel and drinking coffee, but I had planned to write at least one note, on that letterhead, to a person whom I know would treasure the history of the hotel.

Not to be dissuaded, from my enjoyment of the moment, I nevertheless basked in the view and ambiance, and was pleased to be able to share the moment with friends; but most assuredly disappointed, at least a bit.

There are some things in the experience we call life, which leave indelible imprints on us, whether we want them to or not.

I have two idiosyncrasies which are related to having spent a season, of my life, without a home, which included living in a hotel, a tent, a car, on the beach, and on a boat.

Whenever I travel to a new location, I always think about where I could find shelter; I do not mean a hotel room, but rather a public area or restaurant that stays open all night.

I know, thank God, there is no need to worry anymore, about such things, but the impact of having been homeless, never completely leaves you; and while I am not necessarily conscious of how I am looking over an environment, somewhere during that particular journey, a thought crosses my mind, that speaks to temporary lodging.

My second oddity is that inevitably, anytime I check into a new hotel room, after the initial walk-through, trying to take in where we will be spending the night, I seriously look around and wonder if I could live in the room. I do not mean spend a week or two, the summer or winter season, but call the room home.

The first test any room must pass is how much room does it have for books – there are sections of books, which in my mind, I have made peace with eliminating, if needed – so it is not all of the books, which need to find a place to live, but history, the Middle East, Cuba, poetry, a bit of reference and literature, and the Bible.

I will admit, that the rooms which pass that litmus test more often than not, especially now, are usually suites, and often in older hotels, though this is not always the case.

We were pleasantly surprised, many years ago now, at the Signature Hotel in Las Vegas, a city which I am not fond of, but the hotel was quite amazing, most assuredly large enough to live in, with not one, but two bathrooms, a kitchen, living room, and bedroom with a view – who knew, but those views matter.

Since our adventures at the Signature, we have started staying at hotels with what I call a backstory – history, character, ambiance, or even just cute little soaps shaped like ducks – The Peabody certainly holds a place in my heart.

There is something about hotel culture, especially in older hotels, which I find charmingly seductive, as I imagine those who have strolled the halls before me and anticipate what adventure may lie ahead.

We had not asked for the Towers, but were instead gifted with a suite on the 40th floor; I will say, if you stay in hotels often enough, on occasion you do get such treats, as the only room available is the penthouse; but this experience felt like so much more than “just the penthouse”.

I was first introduced to the Towers, in Iowa. While touring President Herbert Hoover’s Library, I learned that he had spent the last thirty years of his life, living in a hotel room!  I must say, I did not imagine ever getting to his Presidential Library, as Iowa is a bit off of my beaten path, and certainly never thought I would end up in the Towers. 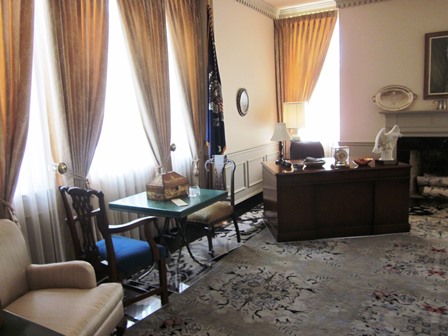 “This room reproduces part of Herbert Hoover’s suite at New York’s Waldorf Towers. Among the many original furnishings are the desk, the gifts of appreciation displayed by the former president, and samples from the Hoovers’ famed collection of Chinese porcelains”

This historic hotel is scheduled to close in less than a year, and be converted into condominiums, something which I find terribly sad. However, as I sat down, at the desk in our suite, I opened the portfolio which contained hotel stationary, reached for the pen, and let out a sigh of deep joy.

For a few minutes, I played with the paper, envelopes, and cards in front of me, and let my mind wander off, imagining not only who I would write, but what I would say, and then a most pleasant thought popped into my head.

No one has sent me more letters on hotel stationary than Peter, who sadly is now gone, so I cannot write him, but as I sat looking out at New York City, I remembered my first encounter with hotel stationary, in Paris, at the Hotel Lotti.

Peter, John, and I had spent the day running around Paris, doing all of those wonderful things tourist in in their twenties do, when someone spotted a sign for a Salvador Dali exhibit at the Hotel. We pranced into the hotel, went to the exhibit, or at least I know I bought a poster, from the exhibit, which still hangs in my bedroom, and then afterwards, one of them led us over to an area where we had access to the hotel stationary, and thus, as if we were guest, picked up pen and paper and wrote – such a wonderful memory.

I know letters are rather out of fashion, and even postcards, thanks to the social medias of the world, are becoming passé, but still, there is something about receiving a letter, which announces itself, before it is opened, that stirs my soul with delight.

Later that night, as we walked around the hotel, exploring both the public and private areas of the Waldorf-Astoria, I found myself emboldened by Peter and John, opening a closed door, to the Marco Polo Club. I quite literally thought, they would just walk in, I should too.  What is the worst thing which can happen?  I will be told it is closed or private, and I will apologize.  It was empty, and we had the place to ourselves. 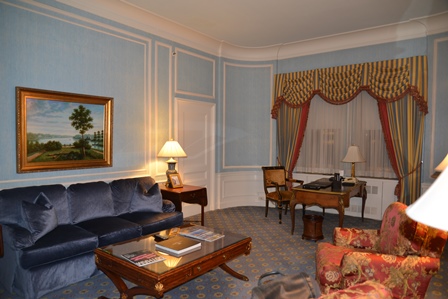 In the morning, I went back to the desk, thought of writing John, but instead wrote Fran, though I brought home a sheet of paper earmarked for him, and a letter I would yet like to write.

A few days after getting back into my unfinished projects, which include sorting a mound of old photographs, I ran across a picture of a woman, whose name I cannot remember. I met her in London, after Peter and John had left for home.  I started thinking about the woman, wondering why I had kept her photograph, all of these years, and remembered that she had given me a book, The Female Man, by Joanna Russ.

I walked over to the literature section, in my library, picked up the book, and began to thumb through it, looking at the passages, I had either put a check mark by, or underlined, as I turned the pages, I came across the above card, from the Hotel Du Commerce, where Peter, John, and I had actually stayed.

My heart skipped about one hundred beats; I had not picked up the book since reading it thirty years ago, and of course did not remember putting the card, in the book. I loved that it was from the hotel and from Paris, but mostly I loved that I had encountered someone who knew how to make the perfect reference to a movie that I love – Casablanca, for all of you under whatever age it is where people no longer watch classic film.  I loved that I still had both the book and the card, and I loved that I had just come home from making another wonderful memory.

I did not dance at the Waldorf-Astoria in one of its famous galas, nor was I entertained in the Marco Polo Club, but I did get to explore its corridors, without limitations, and most importantly, I got to write there!  Be still my heart – That is all for now.