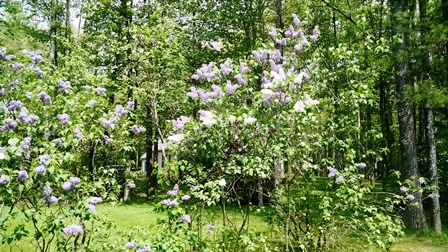 “You can’t see the forest for the trees.”

I woke up to a kitchen perfumed by a perfect lilac, it was given to me by my neighbors, after having shared a delightful dinner; I was told repeatedly, to please pick as many flowers as I liked. I am not sure from where they learned of my love for their beautiful bushes, but their kindness once again touched me, as it has on countless occasions, since moving into this house.

One of the nicest things, which anyone has ever done for me, happened shortly after Kate came home from her last surgery, regarding her ankle, a few months after we moved to Maine.

During that first winter, I had tried to cleverly plan my must do outings to coincide with optimal driving conditions, which for me meant clear roads and daylight. On this particular day, we were in blizzard like conditions, at least to me, perhaps a true Mainer would have called it a simple snow flurry but I remember bone chilling cold, snow covered streets, and very dark and dreary skies; Kate’s doctor phoned a prescription into the pharmacy, which I had to go fill immediately, which meant I had to go out in what felt like a very unwelcoming road.

I drew a deep breath got in the car, and made it to the end of the driveway, when my car suddenly became stuck, half in the street, the rest in the driveway, and with wheels spinning madly. I was feeling rather blue, as I sat there, worried about the car being hit, and trying to figure out if I could walk ten miles, in the snow and ice, to get her medication, when a man pulled his car over, tapped my window, and asked if he could help.

I think the term he used tonight, for my state of mind, that day, was frazzled. Up until this moment, when I have shared this story, my next line is that he got my car loose, suggested I buy some sand, to weigh down the back; and not one time did he treat me like I was a stupid female driver who did not know how to drive in the snow, nor did he say a single thing to me that made me feel any worse or more incompetent than I already felt.

Instead, he was kind, gentle, and helpful. I was in a minor state of shock, truly, and it took me a while to put face and car together, to figure out that it was my neighbor, who had pulled over on his charger and come to my rescue.

Tonight, I had an opportunity to break bread with him and his wife, I wanted to publically thank him for his very gallant behavior; and give him his proper dues in front of the person who I thought might most appreciate hearing about her husband’s chivalrous behavior. As I began to tell my story and say thank you, he tried to not make a big deal about what he had done, but after a few minutes of conversation, there were two facts which became known to me, which make this moment even more extraordinary.

He said tonight, “I did not want to mention anything, as you already seemed quite frazzled.”  Instead, he asked: “Is it okay if I get in the car and try to drive it?” which I happily agreed to.  I remember thanking him profusely, and him saying it is no big deal.  I left to the drug store and came back to find he had plowed my driveway for me.

(A deed he would repeat on more than one occasion, he has also given Kate countless advice and help on her projects, local rules and regulations, information about how our house was built, and even came charging over, after his wife tracked him down, in response to Kate’s repeated phones calls, to aid us and our friends from Miami, in our own, well their own, I mostly just stood back begging them to stop and photographing them, in the lumberjacking projects, and much to my delight, discussed politics with me!)

I also learned tonight, that his magnanimity is shared by his equally kind and considerate wife. It was his wife, who had first driven by, seen me in my state of despair with spinning wheels, and had gone home and told her husband that I was in trouble and needed help.  She was a complete stranger, at the time, which had no reason to give me or my spinning wheels a second thought, but thankfully did.

As I sat listing to them fill in the details of a rather low and helpless moment, which they turned into a time of genuine gratitude and hope, not only did I feel extremely grateful and blessed to have bought the house next to theirs, but I also started thinking about how many random acts of kindness we forgo, and why – especially those acts which might cost us little, like letting someone cut in front of us, at a traffic stop, and those which might cost us a bit more, like taking notice of a need and asking our poor husband to put on his winter coat and venture out to help a neighbor. 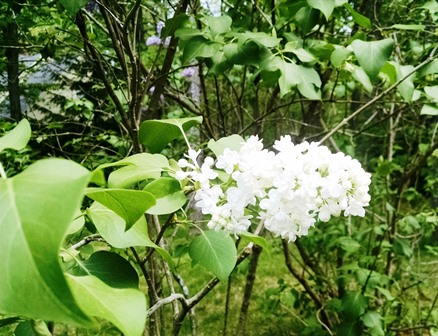 There are so many reasons to feel despondent about our current state of affairs; but there is also hope – sometimes, we just need to adjust our view, and peer through the lilacs, into the woods, and lay sight on the decency which still exist. That is all for now.