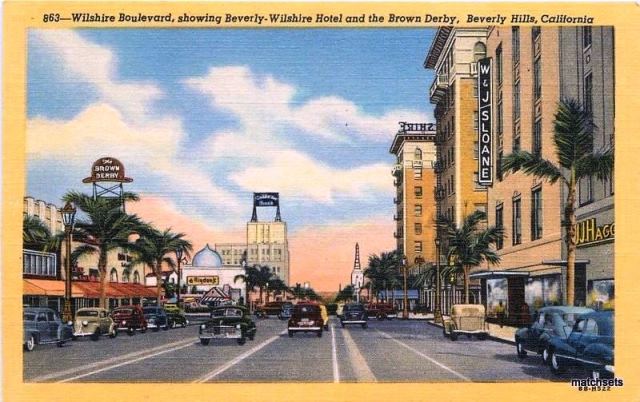 Once upon a time, I used to live off of Wilshire Boulevard, in Los Angeles, California. I happened to move there shortly after the original Brown Derby Restaurant, the one shaped like a derby hat, was demolished.

One evening, after walking around the Ambassador Hotel, I ventured north a block, until I came the site of what had once been the home of the famed restaurant. I bent down and picked up a piece of Brown Derby debris, it was slightly curved, like the brim of the hat.  I took it home, as a souvenir of an era, I only knew in the movies, but felt I would have fit into it perfectly.

This wonderful post card, with it vibrant colors, is from the 1940’s and features the Brown Derby in Beverly Hills.

“Wilshire Boulevard, the ‘Fifth Avenue of the West’, is one of the principal thoroughfares of Metropolitan Los Angeles.” Along its route, via the Miracle Mile, Beverly Hills, Westwood, and to the beaches west of the city are many smart shops, fine cafes and famous hotels. It is considered one of the most heavily traveled boulevards in the world.”

In case you are wondering, yes I still have that piece of history!