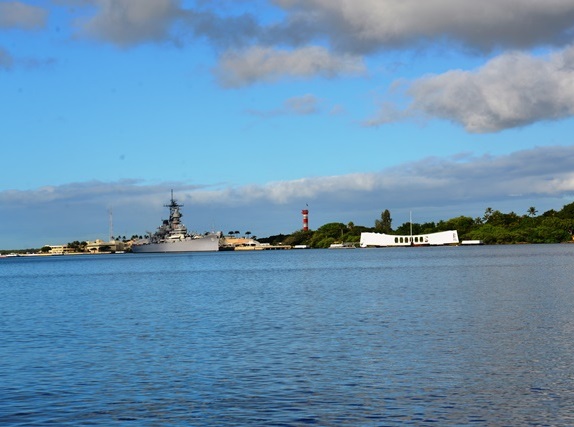 {Photograph taken on the boat, as we approached the Memorial, an iconic shot that includes, from left to right, the USS Missouri, where the Japanese surrendered, ending World War II, in the Pacific, the harbor control tower at Joint Base Pearl Harbor-Hickam, which was built in 1925, and from where the first telephone warning about the attack on December 7, originated, and finally the memorial to the USS Arizona, which was built over the ship.}

The United States entered World War II because of the unprovoked and undeclared act of war by the nation of Japan.

Our battleships were all moored in Hawaii that morning, four out of the eight were sunk, though only the USS Arizona remained at the bottom of the sea, 188 airplanes were destroyed.

The Philippines, Guam, the Wake Islands, Malaya, Singapore and Hong Kong were all attacked that day as well, and within hours America was not only at war with Japan, but also her allies, soon after.

Undoubtedly, the Japanese underestimated their enemy, believing that the attack would demoralize the Americans who were already isolationist; instead it spurred America to become a global power that would not only defeat Japan, but Italy and Germany as well, winning the War in 1945, and “making the world safe for democracy”, as it were.

As we stop to take note of this moment that left an indelible mark on America and history, I have thought a great deal about this anniversary, which with so few surviving veterans, of this attack, and the war, in general, may well be one of the last moments of remembrance that will be shared by those who were actually a part of this history, which has captivated me as long as I can recall.

I have no doubt that my interest in World War II began with the movies, for me it was those late, late, late night movies, that used to come on after the talk shows, which came on after the eleven o’clock news, when I should have been in bed, but so often was not as we would come home from church late, have dinner and often find ourselves in front of the television with my father, as he unwound from work – which was church.

The movies were always filled with heroic figures who clearly delineated the differences between right and wrong; you knew who the good guys were, even if they were not wearing white cowboy hats, and there was never any confusion about who the bad guys were – a nice black and white world, which so perfectly suited me, especially after having been in church.

By the time I was old enough to pick my own reading material, I was clearly drawn to the war and its heroes, which meant I naturally hated the wars villains, and eventually this path led me to my interest in Israel, the people and the nation, who were also the heroes from the Bible, which was the center of church – I so love when it all fits together!

Over the years, I have taken pilgrimages to the landscapes that were scarred and impacted by this war, spoken with both veterans and victims, visited museums and memorials, watched documentaries and news stories, read both non-fiction and at least one piece of fiction more than once (Winds of War and War and Remembrance by Herman Wouk) and always felt grateful that the Axis powers were defeated, as I have continued to be astounded at the cruelty inflicted on humanity and marveled at the many acts of honor and courage committed by both those in uniform and the ordinary citizen who found themselves presented with an opportunity to be of service to their fellow man, and chose to do so also with honor and courage.

Being able to visit Pearl Harbor this year was a true honor, I had seen the Memorial once before, but only from a distance. I must say approaching the Memorial, by boat, moved me as deeply as walking on the beach at Normandy, stirring in me a very wide range of emotion, including a most profound gratitude, at the sacrifice made by so many that I might enjoy the freedoms I have today.

As I write these last few lines, I am very much aware that today there are men and women stationed around the United States and the world, who at great personal sacrifice, daily put on their uniform and take up their weapons to fight for me, my way of life, and all of you. I know we owe a debt that can never be re-paid to those brave and selfless souls, and to their families who must deal with the heartache and hardship of having their loved ones in the military; but at the very least may I say thank you for your service, it has not gone without notice and well we know that you carry a heavy mantel of responsibility in the legacy, which you have inherited, which must weigh heavy on your shoulders.

What does this anniversary mean to you? I hope you will find a moment to stop and reflect on the sacrifice and the significance of this event in all of our lives, I know that I will never forget.  May God bless America.  That is all for now.

A few photographs from Pearl Harbor and Ford Island: 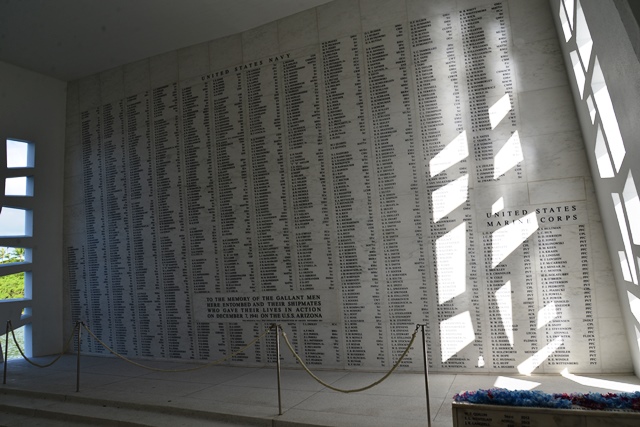 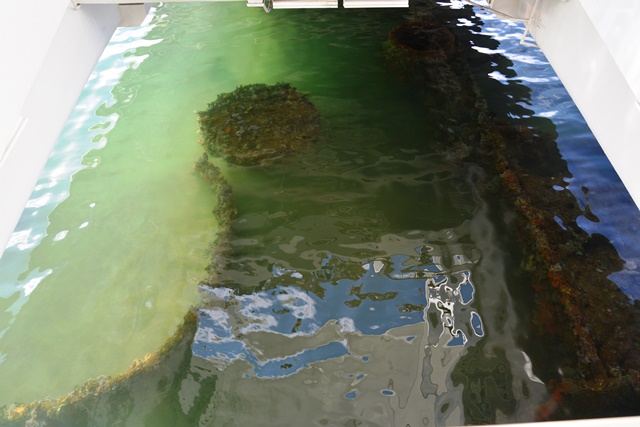 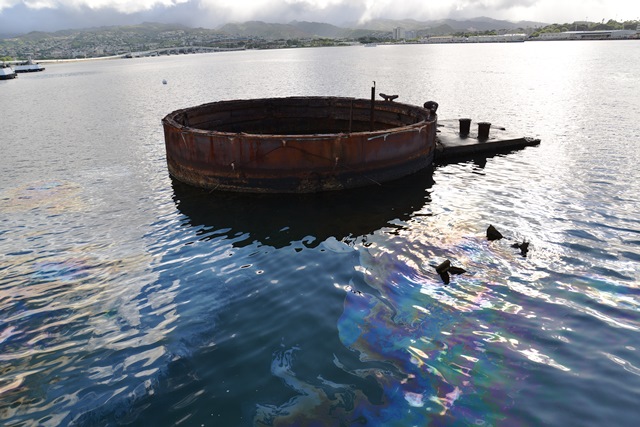 One of two gun turrets 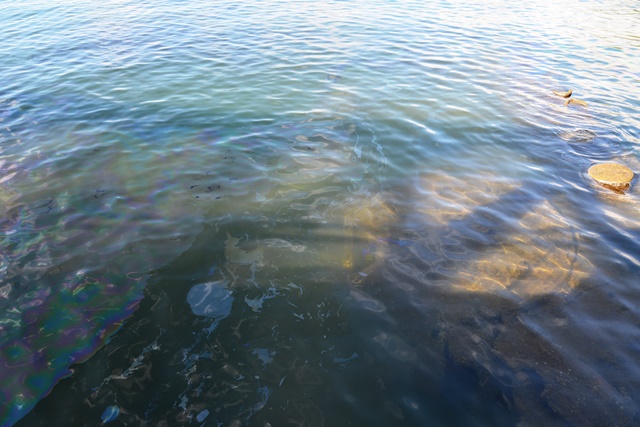 A view of the underwater hull 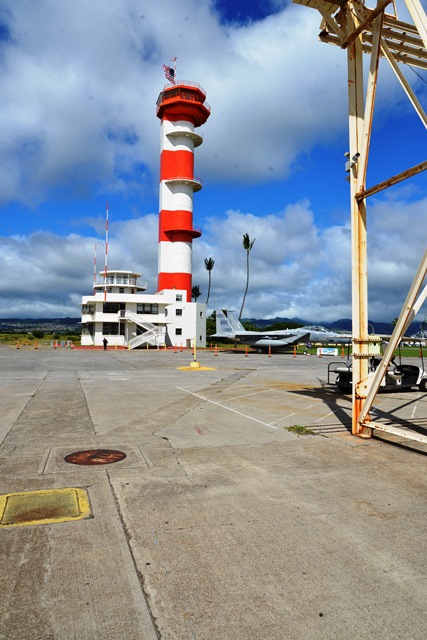 The harbor control tower at Joint Base Pearl Harbor-Hickam, on Ford Island 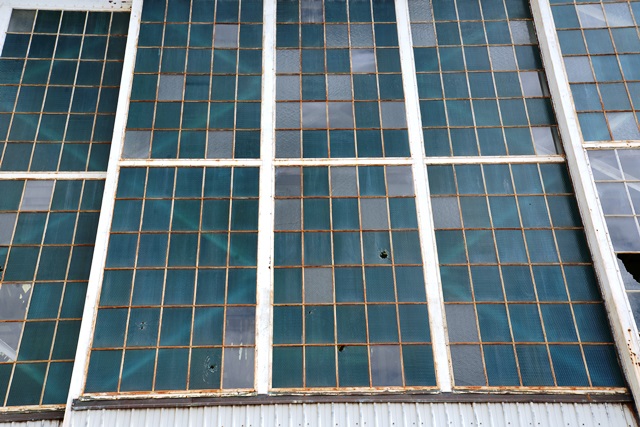 Hanger 175, on Ford Island, that bears bullet holes from the attack, as a badge of honor 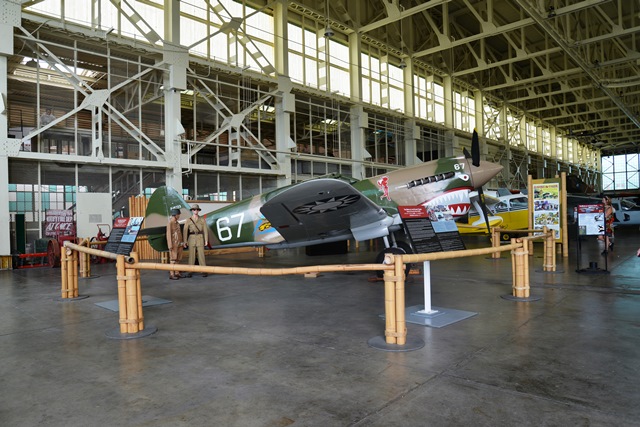 One of the Flying Tigers, which I first learned about through John Wayne — there are two museums at the World War II Valor in the Pacific National Monument, at Pearl Harbor and two on Ford Island, at the air field, which cover various aspects of aviation and exhibits that certainly enhance the experience. 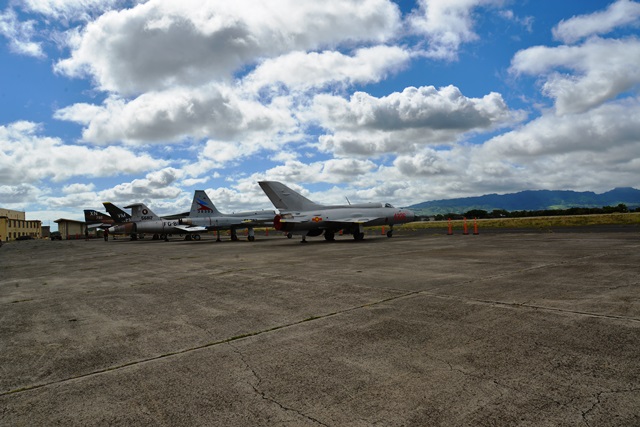 One of the airfield that was attacked that morning, at Ford Island 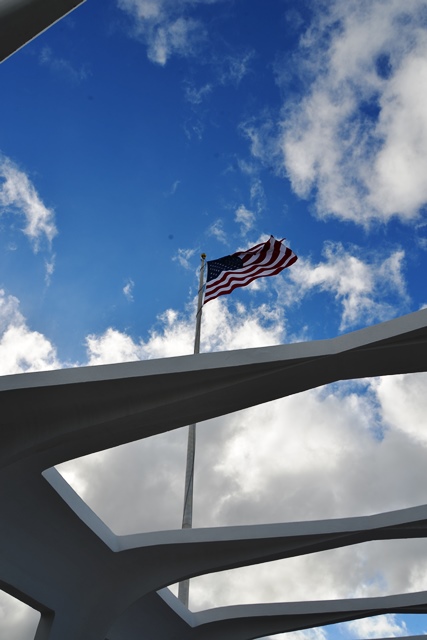 The American flag on the Memorial 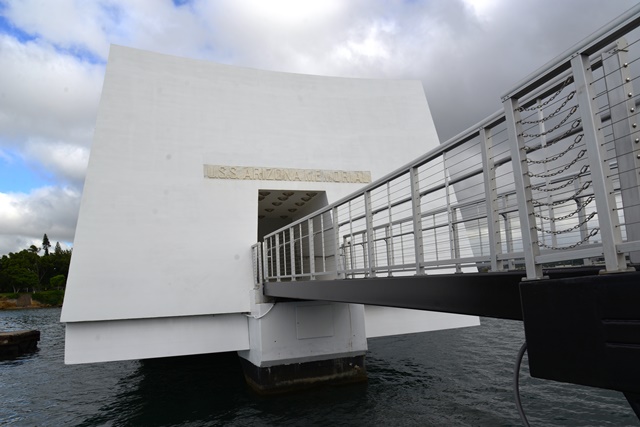 Taken as we were leaving the Memorial

Below are a few postcards, which I think capture their subjects better than I did, all are from Pacific Historic Parks: 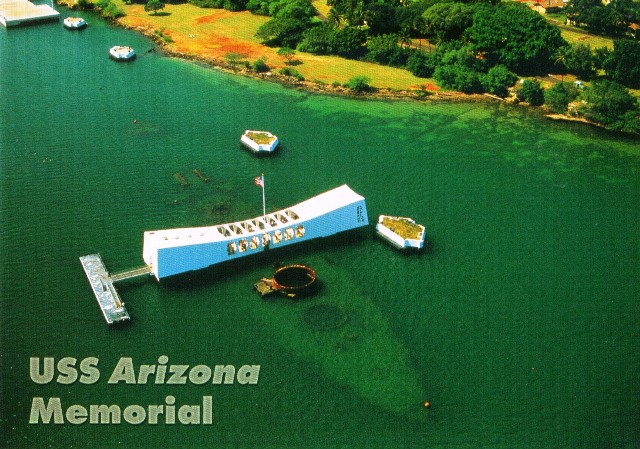 An aerial view of the USS Memorial, which sits over the sunken ship 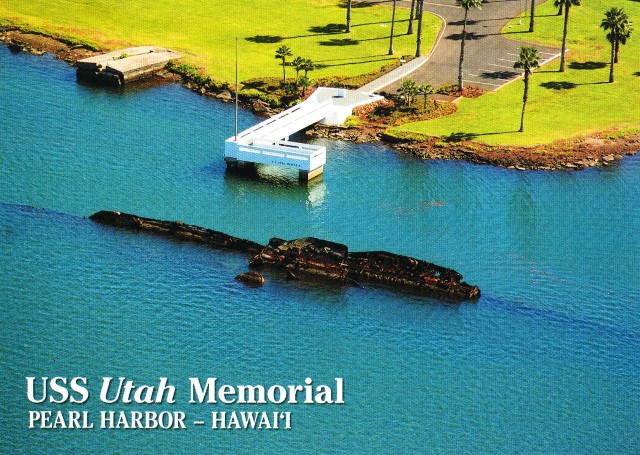 The USS Utah Memorial, at Ford Island, in Pearl Harbor where 57 men died 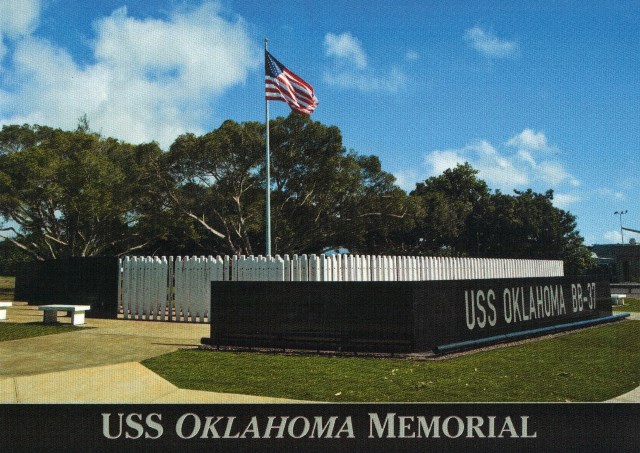 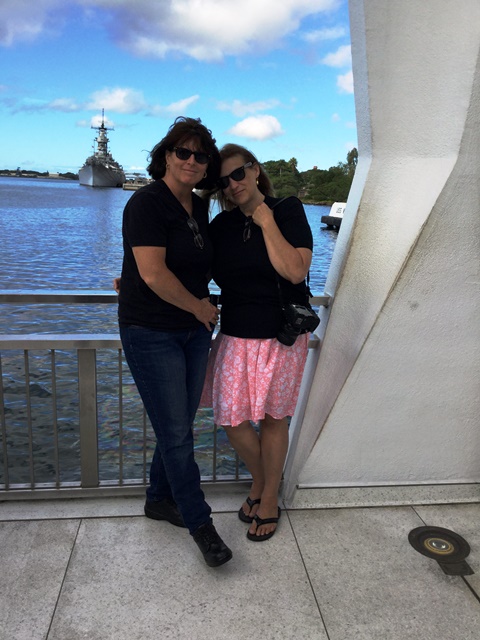 Kate and I on the Memorial 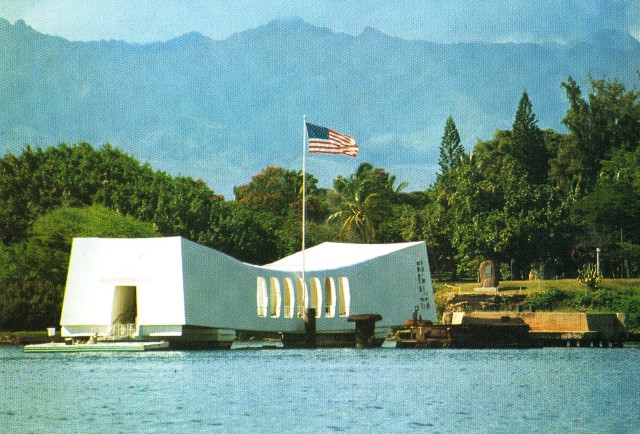