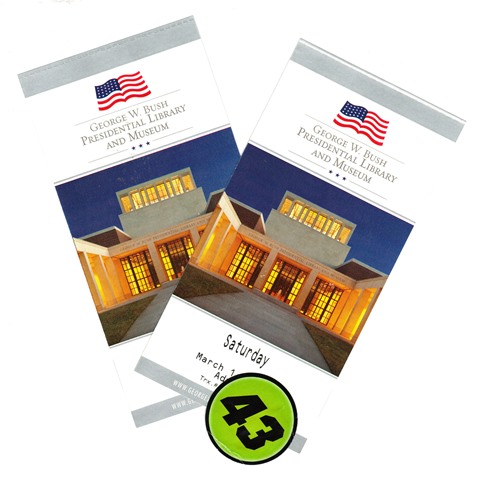 One of my warmest memories, about President George W. Bush, does not involve him, but rather my neighbor Phil.

I had volunteered for both of the President’s campaigns, a fact that could not be lost on any of my mostly Democrat neighbors, as my yard was filled with signs!

As the election came upon us, Phil was certain that President Bush would not win; a loss that he would not have been unhappy about, but having known how much I had put my heart into the election, Phil decided to make me a special dinner, on election night, knowing that I would need to be consoled .

Of course, the President did win, and it was Phil who was completely confounded and needed comfort. I always enjoyed our chats, and as we talked about politics and people, I think we were both comforted. I deeply loved Phil and miss him very much; there are many wonderful memories of moments we shared, but remembering that night always brings a smile to my soul. 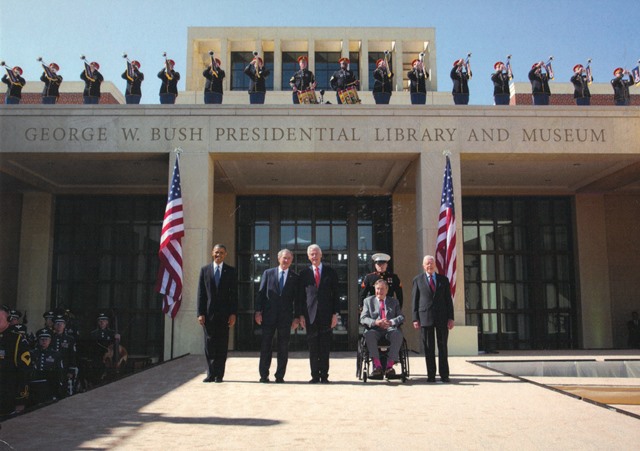 As you may know, there are thirteen Presidential Libraries, which serves as museums and archives of our Presidents. I have been fortunate enough to visit all thirteen sites, with President Hoover’s being the last library on my list; however, I have been remiss in sharing those visits with you; something I am going to start to correct, with President George W. Bush’s library located in Dallas, Texas, on the Southern Methodist University campus. 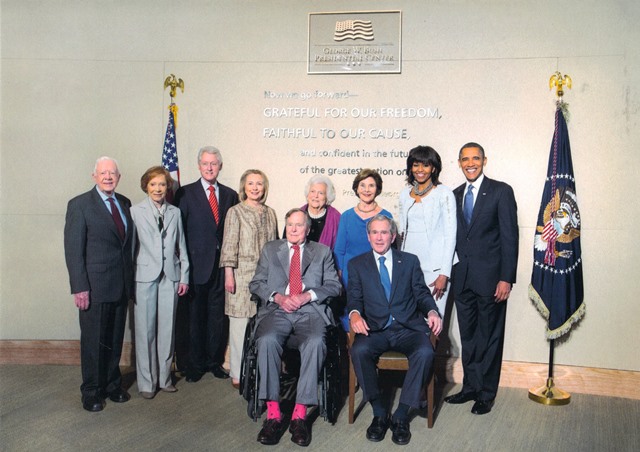 After attending primary schools in Texas, George W. Bush enrolled at Phillips Academy in Andover, Massachusetts, from 1961 to 1964. Upon graduation, he studied at Yale University, completing a Bachelor’s degree in history in 1968. After college, Bush enlisted in the Air National Guard, serving in Texas and Alabama until his discharge in November 1974. He completed a Master’s degree in Business Administration from Harvard University in 1975.

In 1977, George W. Bush met and married Laura Lane Welch, a former teacher and librarian, in Midland, Texas; the couple had twin daughters, Jenna and Barbara, in 1981.

Before beginning a career in politics, Bush worked in the Texas oil industry, founding Arbusto Energy in 1977. In 1986, he underwent a recommitment to his Christian faith, which had a profound impact on his life. He moved his family to Washington D.C. in 1988, while serving as a campaign advisor and media liaison with his father’s Presidential campaign. In 1989, he assembled a group of investors that purchased the Texas Rangers baseball team and served as their managing general partner for the next five years.

In 1978, following his family’s distinguished tradition of public service, George W. Bush made his first run for political office to be U.S. Representative of the 19th District in Texas. He lost that race to Kent Hance. In 1994, Bush once again ran for public office and was elected the 46th Governor of Texas. Governor Bush won re-election in 1998 with nearly 69% of the vote, becoming the first Governor in Texas history to be elected to two consecutive four-year terms.

In June 1999, George W. Bush announced his candidacy for the Presidency of the United States. His opponent in the 2000 election was Vice President Albert Gore. Though the Presidential election was held November 7, 2000, the final outcome was not known until December 12, when the Supreme Court decision Bush v. Gore certified Florida’s electoral votes. George W. Bush was inaugurated as the 43rd President of the United States on January 20, 2001.” http://www.georgewbushlibrary.smu.edu/The-President-and-Family/George-W-Bush 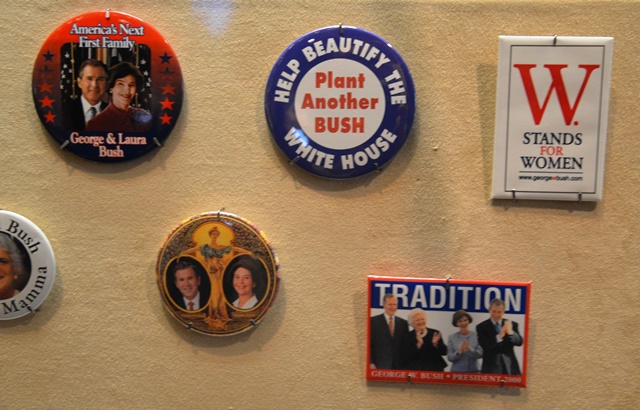 A few buttons I do not have 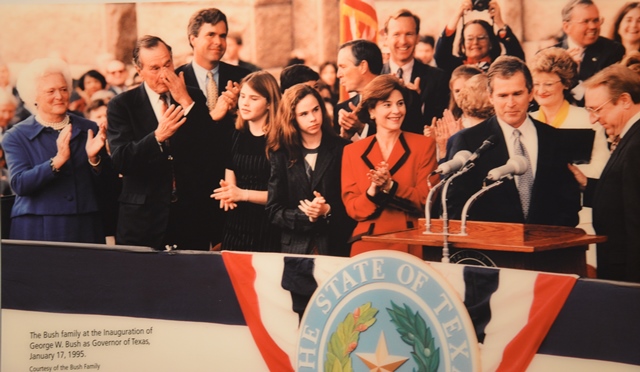 I love this picture — just look at the faces of his family — the expressions are priceless! 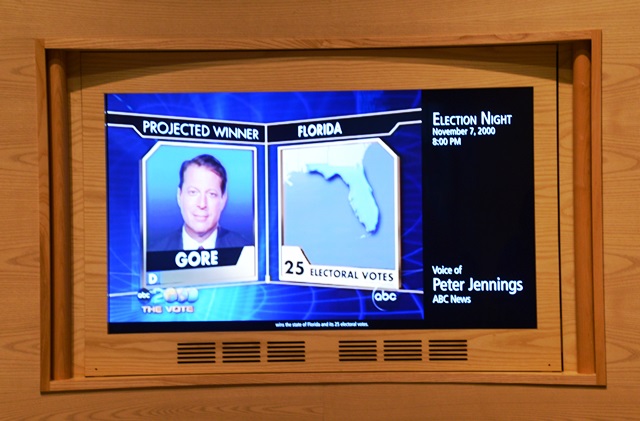 There is an excellent exhibit, which covers election night, on November 7, 2000,

when the results were too close to call —

one is able to watch how the major networks struggled with predicting a winner. 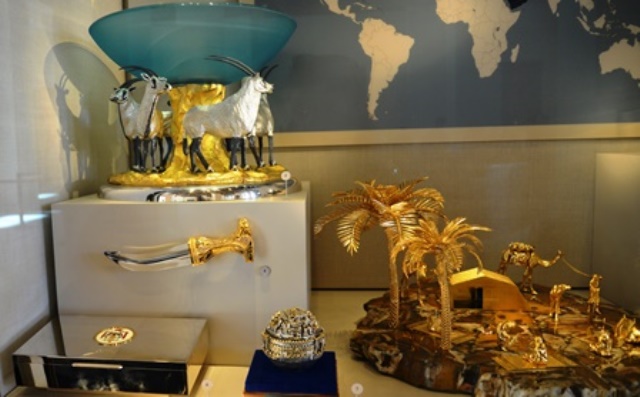 The obligatory display of gifts from foreign nations. 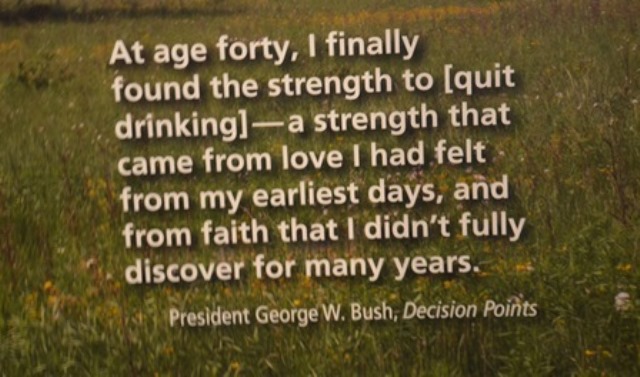 One of the most pivotal points in the Presidents life. 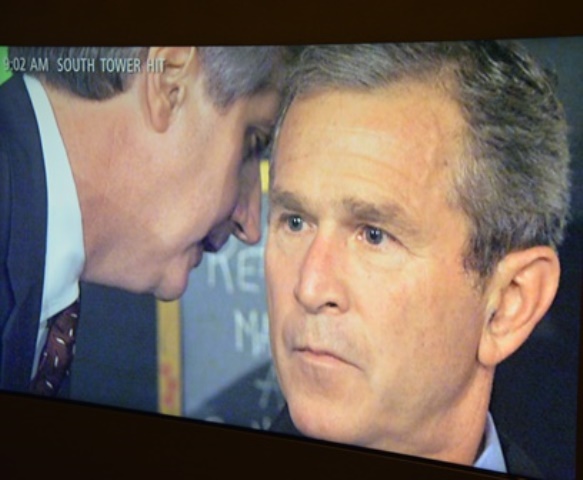 The picture which speaks louder than words ever could. 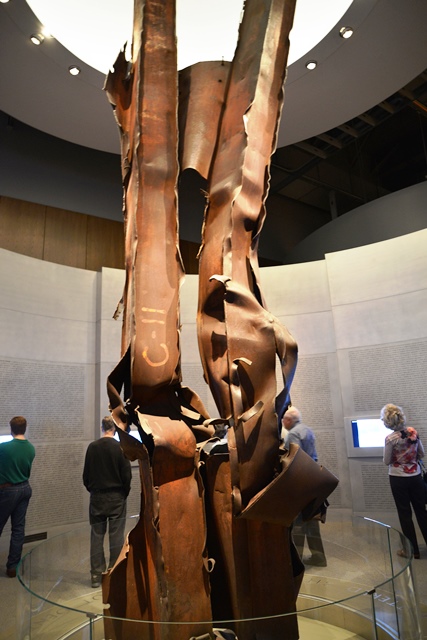 C-11, A piece of the World Trade Center 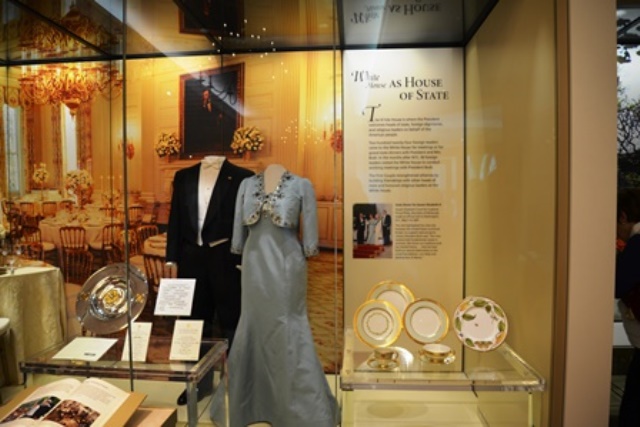 A peek at entertaining in the White House. 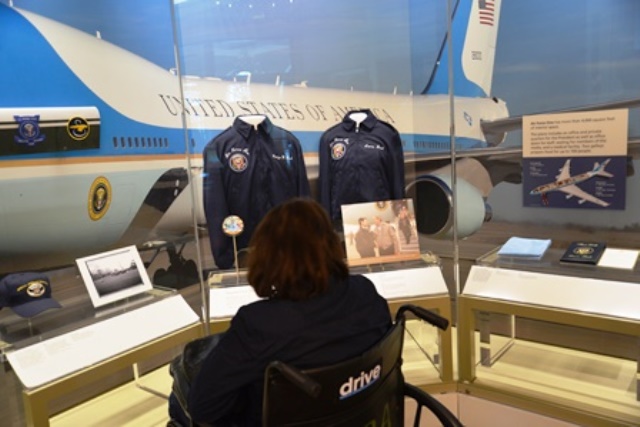 Kate looking at the Air Force One exhibit 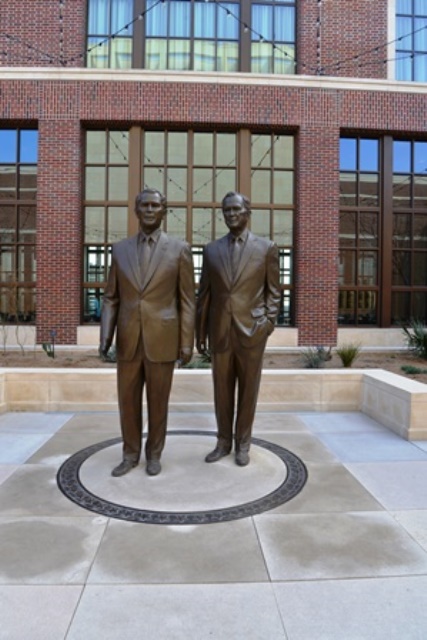