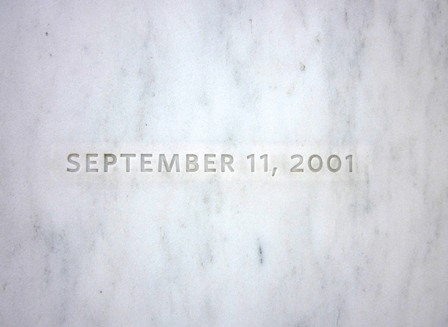 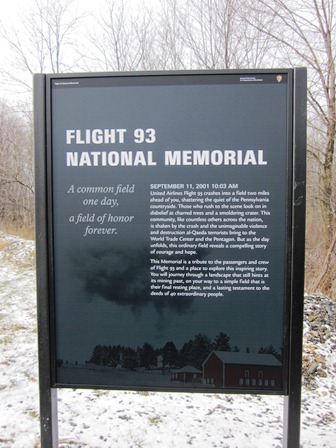 On a very cold winter day, we ventured to Shanksville Pennsylvania, the site where flight 93 crashed, on September 11, 2001.  We had arrived in the area the night before, spending the evening in Somerset, from which the path to the site is clearly marked.  It was a dreary kind of day, and the snowy gloom fit the somber site, which had once simply been a farmer’s field and was now a field of honor. 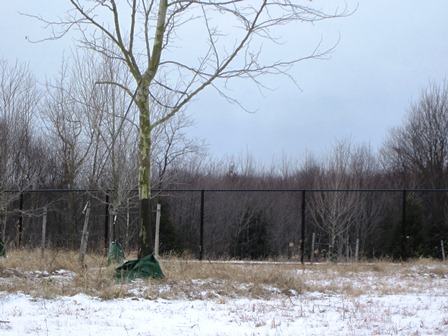 (The crash site which only families may visit)

For us, the drive up toward the Memorial site was somber.  Leaving the parking area, you instantly walk toward a display, which tell the story of what happened on 9-11.   Placed in quotation marks, I share with you the words attached to the pictures. 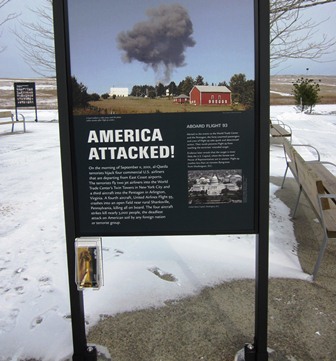 “On the morning of September 11, 2001, al-Qaeda terrorists hijack four commercial U.S. airlines that are departing from East Coast airports.  The terrorists fly tow jet airlines into the World Trade Center’s Twin Towers in New York City and a third aircraft into the Pentagon in Arlington, Virginia.  A fourth aircraft, United Airlines Flight 93, crashes into an open field near rural Shanksville, Pennsylvania killing all on board.  The four aircraft strikes kill nearly 3,000 people, the deadliest attack on American soil by any foreign nation or terrorist group.”

United Flight 93 carried seven crew members, who had simply reported for work that September morning, just as they had countless times before; there were also 33 passengers who were happily making their way from Newark New Jersey and looking forward to landing in San Francisco, California.  Unbeknown to these 40 individuals, they were sadly about to become heroes.  This small group of men and women, would rise to the highest calling which any can be urged to answer; four terrorist, on board Flight 93 would soon force her crew and passengers to give their lives, trying to save the lives of other – as well as avoiding yet another tragic attack on our nation’s morale, by sparing the terrorist target in Washington, D.C. 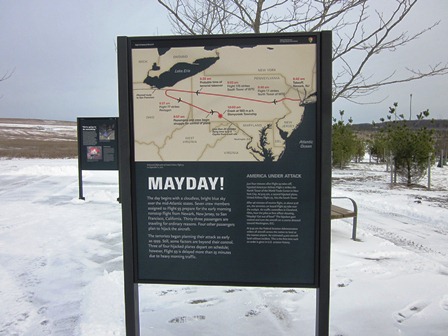 After 46 minutes of route flight, at about 9:28 am the terrorist on board flight 93 take over the cockpit.  Air traffic controllers in Cleveland, Ohio, hear the pilot or first officer shouting ‘Mayday!  Get out of here!’  The hijackers gain control and turn he aircraft on a course directed toward Washington, D.C.

At 9:42 am the Federal Aviation Administration orders all aircrafts across the nation to land at the nearest airport.  An estimated 4,500 aircraft land without incident.  This is the first time such an order is given in the U.S. aviation history.” 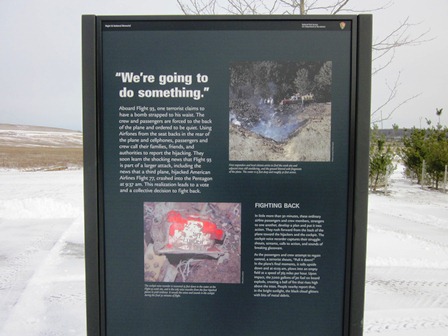 “We’re going to do something.”

“Aboard Flight 93, one terrorist claims to have a bomb strapped to his waist.  The crew and passengers are forced to the back of the plane and ordered to be quiet.  Using Airfones from the seat backs in the rear of the plane and cellphones, passengers and crew call their families, friends, and authorities to report the hijacking.  They soon learn the shocking news that Flight 93 is part of a larger attack, including the news that third plane, hijacked American Airlines Flight 77, crashed into the Pentagon at 9:37 am.  This realization leads to a vote and a collective decision to fight back.”

“In little more than 30 minutes, these ordinary airline passengers and crew members, strangers to one another, develop a plan and put it into action.  They rush forward from the back of the plane toward the hijackers and the cockpit.  The cockpit voice recorder captures their struggle:  shouts, screams, calls to action and sounds of breaking glassware.” 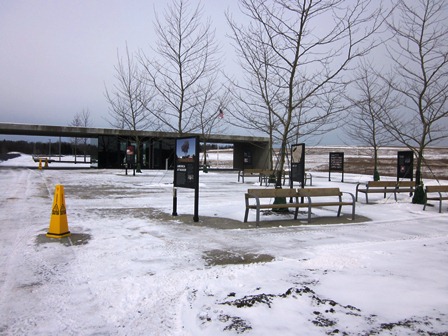 As the passengers and crew attempt to regain control, a terrorist shouts, ‘Pull it down!’  In the plane’s final moments, it rolls upside down and at 10:03 am, plows into an empty field at a speed of 563 miles per hour.  Upon impact, the 7,000 gallons of jet fuel on board explode, creating a ball of fire that rises high about the trees.  People nearby report that, in the bright sunlight, the black clouds glitter with bits of metal debris.” 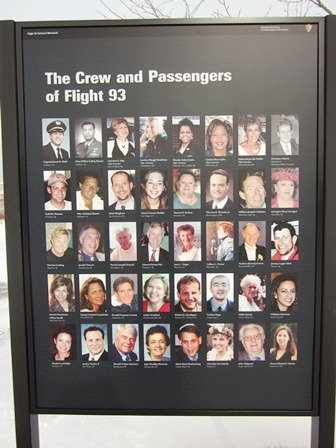 “Alerted to the events at the World Trade Center and the Pentagon, the forty unarmed passengers and crew of Flight 93 take quick and determined action.  Their revolt prevents Flight 93 from reaching the terrorists’ intended target.

Evidence later reveals that the target is most likely the U.S. Capitol, where the Senate and House of Representatives are in session.  Flight 93 crashes less that 20 minutes flying-time from Washington, D.C.” 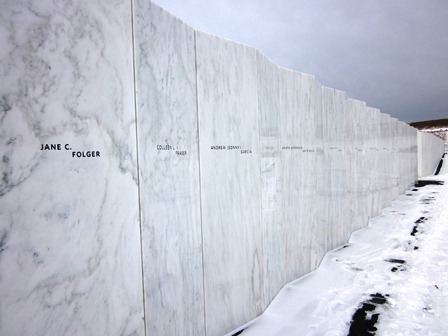 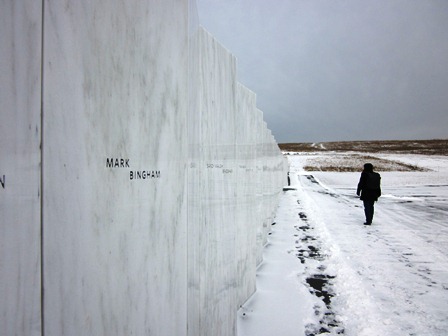 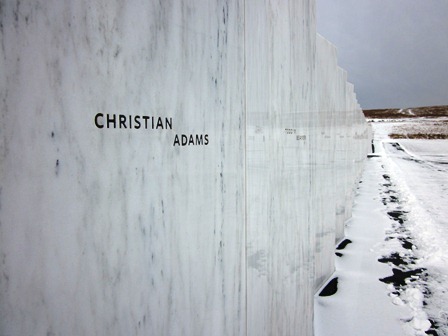 You continue walking past an information booth, with an area to gather to the right, and then on to the white marble slabs which bear each victims name. 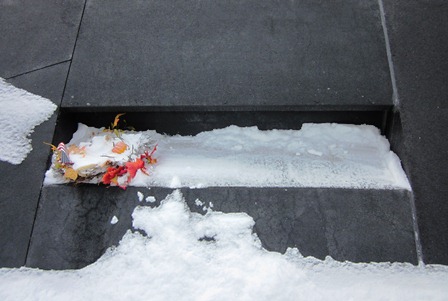 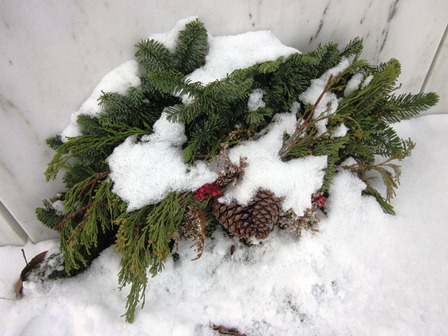 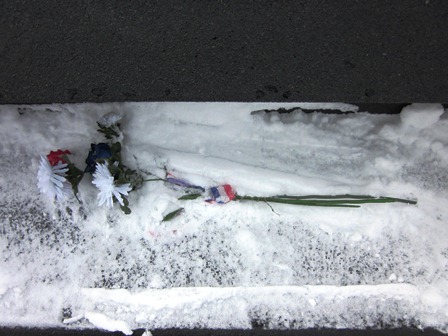 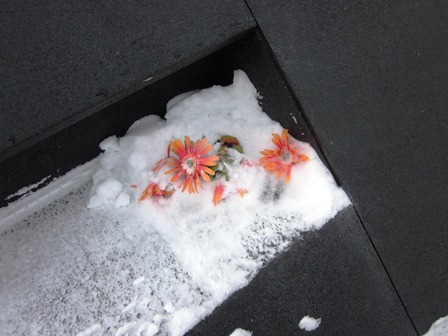 Covered in snow, tokens of remembrance 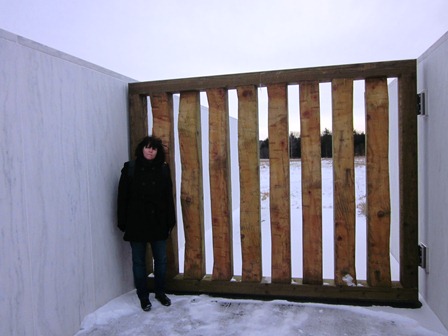 Beyond the fence is the crash site. 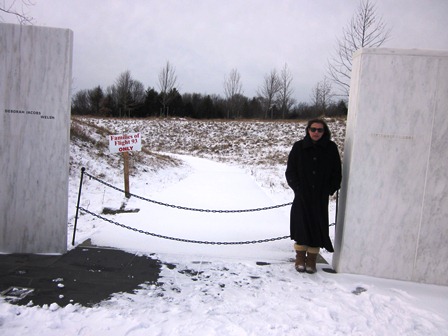 It was an honor to walk these grounds.  If you plan to visit this site, or would simply like to learn more:  http://www.nps.gov/flni/index.htm