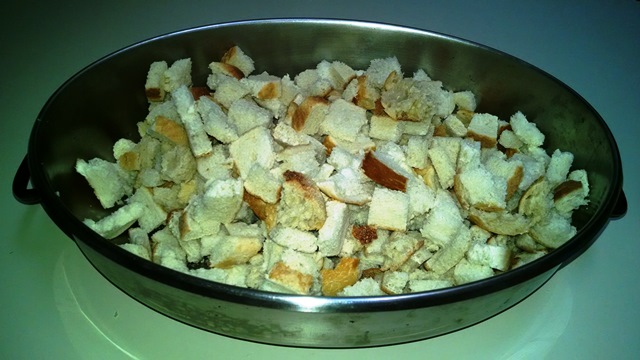 When I was in eighth grade, we were living in Hawaii, and I came home from school, inspired by my Home Economics teacher: I asked my Mother if I could cook Thanksgiving and if we could have duck, instead of turkey.  My Mother, God bless her, said yes and even managed to procure a duck!

My Mother was an extremely generous person, in all things, including indulging me in the kitchen. She never said no to letting me help or experiment with whatever notion crossed my mind.

I am missing my Mother; okay I always miss my Mother, but the last several weeks the loss has felt deeper than normal.

Part of it is that it has suddenly gotten much colder, we had been having a rather mild autumn; and my Mother hated being cold. I have a few more aches and pains myself, and every time something hurts on me, I think about the pain my Mother lived with and how much more I should have done to alleviate her woes.  The other thing is that a few weeks ago, I made an early Thanksgiving Dinner for a friend who happened to be “in the neighborhood”.

Linda, my friend, whom I have previously written about, mentioning that she is the most loyal person I have ever met, a quality I much admire, is also a consistent prayer warrior, in my life. When Miss Lucy, my great-niece, was unwell, Linda showed a special interest in praying for Miss Lucy, and then Linda “Liked” my sister, Caroline’s page: The Saxophone Player’s Wife; thus it seemed like a natural to have them all meet; unfortunately, those plans did not work out, nevertheless, I did make a turkey dinner – including stuffing!

I have to say that stuffing turned out particularly great, con modestia aparte, as my Father would have said. The stuffing, that I make is basically my Mother’s stuffing; I do not have a recipe she wrote down, but thankfully, as my Mother never kicked me out of her kitchen, I got to learn by watching and helping.

Now, do not get me wrong, I love food – I love to cook, to eat, to read, to try, to explore, to invent . . . and to modify, so yes, I have thought about making stuffing with sausage or chestnuts or raisins, and those may all be good an well when it comes to any other meal, but Thanksgiving, be an early Thanksgiving or the one celebrated on the fourth Thursday of November, that always calls for my Mother’s stuffing.

Thus when getting ready for Linda’s visit, I bought several loaves of inexpensive, white sandwich bread, and began to chop it into cubes, that were placed on cookie sheets to dry – the first step in making Mother’s stuffing.

This morning, as I walked into the kitchen, to begin breakfast, I saw the lid to my Mother’s roaster sitting on the counter, filled with cubes of bread, which I am drying for next week’s stuffing. When I saw it, two thoughts crossed my mind: First, I think the bread cubes have brought on my melancholy for Mother, and second, my Mother would never in a million years put the bread cubes to dry, in the top, of her roaster – I immediately moved to correct that – but when I went to put them on the cookie sheets, like Mother did, I thought no, I need to use the cookie sheets, so I will have to put them on something else – a thought that made me feel a bit guilty, I will confess.

I put the bread on a large round, metal, platter, embracing that we add to the legacy we inherit. My Mother almost always cooked with a very tight budget, she managed to make wonderful food on a wing and prayer, literally.  It may well be that all my Mother had, to dry her bread cubes on, was the cookie sheets.

Perhaps, without financial limitations she might have used fancy bread or fresh herbs or some other ingredient; but one of the many amazing things about my Mother was what she accomplished with such limited resources, in all aspects, of her life.

Below is a good approximation of her recipe, of course this, like the majority of the recipes that I share with you, are to taste – once the broth is seasoned with the butter and herbs, dip a small cube of bread into it, and see what you think – but remember that more is always better! The butter broth mixture is going to be poured over a lot of flavorless bread, so it should be very tasty; it has a lot of work to do.

2-3 cubs of Chicken or Turkey Broth

Cut the bread into large cubes. Let the bread dry 1-3 days, depending on the heat and moisture in your home.  You can lay the cut cubes on cooling racks, which have been placed on top of cookie sheets.  Periodically, turn the cubes to assist in drying.

In a large skillet, sauté onions, until translucent, add celery, and herbs. Simmer this mixture for at least 10 minutes.  Add 2 cups of stock, and bring to a boil, then reduce heat and simmer for another 10 minutes.

In a large baking dish, put about half of the bread cubes and begin drizzling the butter – broth mixture, over the bread. You want to make sure you cover all of the bread, repeat with the rest of the ingredients. The bread should be moisten, but not mushy.  If you do not have enough stock to use all of the bread, reserve the bread for bread crumbs, in the future, or feed the birds.

Cover the dish with foil, and bake, in a 350 degree oven for about 40 minutes. You can remove foil, during the last ten minutes, if you want the stuffing to brown.

If you want to stuff a turkey, go ahead follow the same directions, except the stuffing can be drier, as there will be juices from the turkey that will impact the consistency. You could also cut the recipe in half, to stuff a chicken. 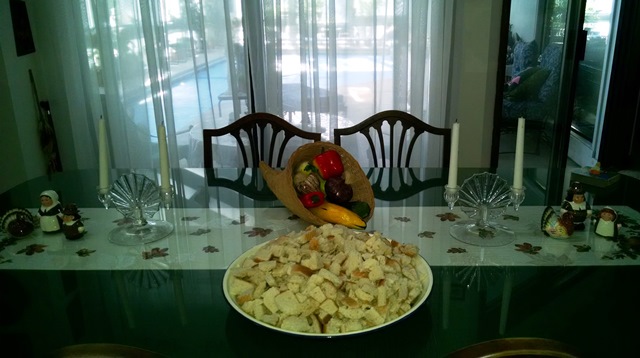 I made her hash browns for breakfast, they were delicious, but they did not help; I am still missing her, but so very grateful for the time I was given with her and him – who was in fact an even better cook than his wife, my Mother.