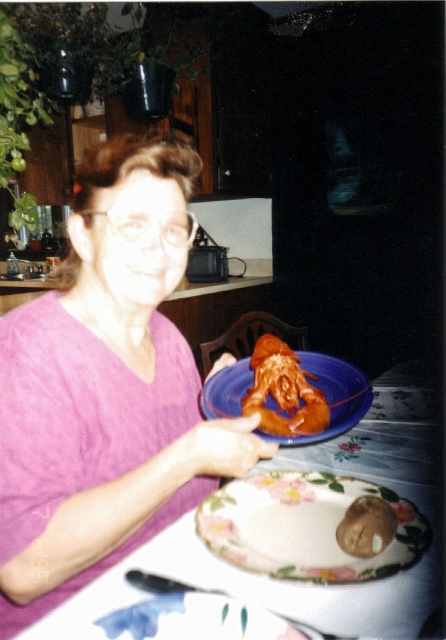 Because we were in Maine!

Many years ago, it was quite a pleasure to be able to prepare a lobster for my Mother on her birthday, today would have been her 86th birthday.  Lobster  was something she had never eaten before, and of course, being in Maine, where lobster fishing began, and where the first lobster pound was established, my Mother wanted to try a fresh lobster.  I realize the picture is not that great, but the joy on her face was real.

I must say it was Kate who prepared the lobster and I focused on the carrot cake, but the celebration was lovely and she is missed.

If you would like to make a memorable meal for someone, do not be afraid to attempt this — yes, it should be fresh, which means alive, and yes that can be difficult, but if you get past that, with lobster it really is all about the butter — period.

Lobsters were once so plentiful that they were the designated food for the “poor” — indentured servants, prisoners, and even children who were not asked what they wanted to eat, were fed lobster.  If you would like to read more about lobster, check out the link below.

To make lobster, at home, you will need a large pot, one which can hold a lobster for each of your guest; place equal parts of salted water and white wine, on the bottom, and insert a rack, once the water is boiling, place the lobsters, one at a time, making sure they are not over crowded; cooking them until the shells turn bright red, and the meat is translucent — about 10-12 minutes for a one pound lobster.  Serve it with individual dishes of melted butter and lemon wedges.

Lobster can also be served with boiled potatoes, corn on the cob, and rolls, for a traditional New England boil feel, or with French fries and salad.

If you do not feel like taking on preparing whole lobsters, may I suggest this delicious bisque, which is also quite special and just a bit decadent.

I use Craig Claiborne’s recipe, published in the New York Times Cookbook. I will also give you his fish stock recipe, as in my opinion, this recipe is really all about the stock – take the time to make a deep, rich stock – it is well worth the effort.

The only true changes I make to his recipe is in the addition of the amount of herbs I use, but that is personal taste, at play.  For example instead of ½ of a bay leaf I add two or three, depending on the size, and always more than a pinch of everything; but the first time you make it, keep to his recipe, and then as with all things, you will make it your own. 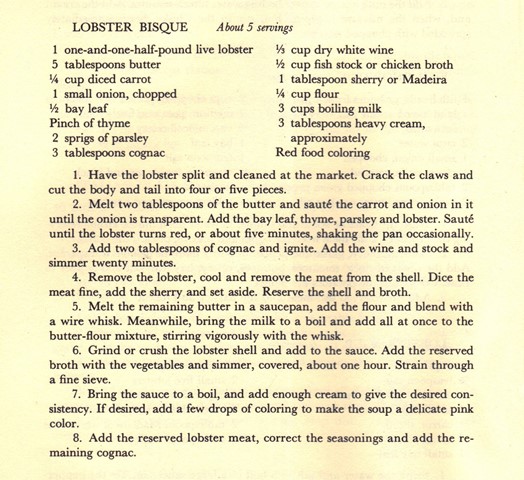