An Ode to the Last of the Extraordinary Wrapping Paper 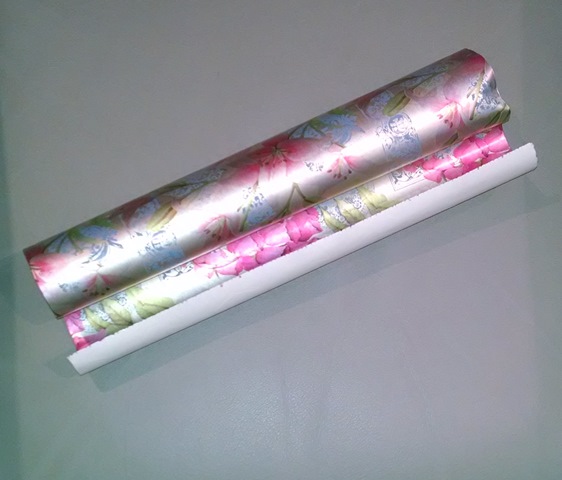 Around five or maybe six years ago, at Christmas time, Kate received an odd shaped box in the mail, that contained wrapping paper, ribbons, bows, and I think even a pair of scissors. Being who she is, the gift meant little to her, except that I believe she was happy to see me so excited about the box, which I was.

The rolls of paper were quite luxurious, nothing at all like the wrapping paper I buy at the Dollar Store, which I love; and not even like the fancy rolls from Hallmark, which are also quite fine. I remember looking through the contents of the box gingerly, and imagining what I would do with such an abundance of beauty.  Yes, I seriously thought about making draw liners or covering storage boxes, even a few thoughts of papering walls ran through my head, before I surrendered to the notion that this paper would be used to wrap presents, tokens of my affection, and live out its intended purpose.

Over the years, I have wrapped many gifts in the rolls of paper, which came in that box; the first gift was to my Mother, who treasured such things as pretty wrapping paper, ribbons, and bows. I have taken great joy in giving those beautiful packages away; and with rare exception, people receiving presents wrapped in that paper, have always commented on the paper – it is not just me who has noticed how extraordinary the paper is – in quality, texture, and print.

Recently, I realized that I was coming to the end of my favorite roll of paper, and as I looked at what was left of it, a bit sad that it was almost gone, I focused on who would be given the last gift, wrapped in that paper, thinking about how they too appreciated such silly things as fine wrapping paper.

Oddly, right before Easter, I noticed that Kate had gone and picked up that roll of paper, I was certain she had taken the paper to wrap my Easter gift; but I nonetheless had a little moment where I thought of saying: No, not that paper. Do not use the special paper, just to wrap my gift, I am okay with something else; but thank God I kept my mouth quite.  As I watched her take off into her bedroom with the paper, I thought about how excited she must be with her gift, and how she wanted to make it special, by wrapping it in the pretty paper, and about how sweet that actually was of her.

When I opened my Easter gift, it was perfume, by the way, I carefully saved the paper, thinking about the gifts I was planning to wrap with the end of the roll of paper, and how I could re-use this piece if needed – all was well with the world.

As I began to wrap the gifts for the person, who would ultimately be given the last gift wrapped in my special paper, I did lament there was so little left and all of the gifts could not be wrapped in this paper, but pleased I had other paper to compliment the special paper.

The paper I wrapped the rest of the gifts in was actually from a large green lawn bag of mostly Hallmark wrapping paper, which I had found in someone else’s trash, to the same delight that I had received that special box of wrapping paper, sent to Kate. There were no ribbons or scissors in that bag, but endless rolls of paper, much of it still sealed in cellophane with its expensive price tags attached; I cannot imagine why anyone would through that bag away, but I was thrilled to have everything from rolls of brown butcher paper to graduation to birthday to Christmas paper to wrap gifts for the people I love!

As I finished wrapping the packages, making various stacks and tying them with curling ribbon, I thought about the bows, I still needed to attach, but stepped back feeling quite pleased. I ran through the contents of the packages ,in front of me, and remembered acquiring each item and imagined what the intended recipient would feel when they opened their gifts – I finally settled my sight, on the last gift to be wrapped with that special paper, and thought about the day in Indiana that I had found it, my interaction with the sales clerk, who had been so kind and helpful, and how as I left the department store, I had passed an item, I thought perfect for Kate’s birthday, though it was not something for sale – yet as the day developed – well, I do not want to write too much here, her birthday is a month away!

Anyway, it is time to put away my make shift wrapping station, and close the book on that special roll of paper that I believe fulfilled its purpose; which at the end of the day is really all any of us can hope for, is it not?

I received the gift of the paper, with great joy, excitement, and wonderment; and I tried very hard to use it well and wisely, neither squandering nor taking for granted its beauty and splendor – That Is All For Now.