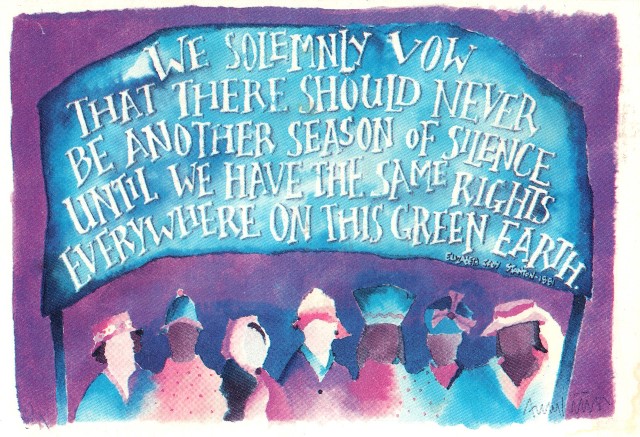 I have been thinking a lot about what might have been for so many, including for me and those I know. Have you wondered how many talented women were denied a promotion or even a chance to try, because they were unwilling to sexually favor their boss?

We often talk about the causalities of war, referring to the young men killed on the battle field, who were not able to cure cancer, or write the great American novel, or lead their nation into peace and prosperity; well what about the women who are casualties of a sexist society that does not respect them because of their biology?

It seems that 2017 will go down in the annals of history as the “watershed moment” when sexual harassment, especially in the work place, finally leaped from the closet, to the boardroom, to the front page of the newspaper and the lead on the evening news – even when it was their colleagues who were the headline.

Honestly, when I saw the latest news about Charlie Rose, it broke my heart and brought me to tears. Why in the world would a man like that, with so much going for him, have to resort to such filth?

It is no secret to those who know me, and those who read these pages that I had long been an admirer of his work. As I have previously stated, when I lived in Los Angeles, through many sleepless nights, I would turn on his show, guaranteed to learn something and be entertained.  Thankfully, I knew very little about his personal life.

Initially, when I heard the accusations against him, I had trouble wrapping my head around the words that were being used to describe what had transpired. The idea of this southern man who loves and lives in New York City, who is both well-educated and well-traveled, successful and engaged on a very wide and varied stage, doing something as uncouth and vulgar as walking out of the shower, into a his room, disrobed, was unfathomable.

It was not until a couple of days ago, that I remembered that I too had experienced what was now unfathomable. What is odd is how the horrible memory came back to me, of this man who had no reason in the world to leave the bathroom disrobed and how embarrassed I still felt.  It was not until this morning that I shared the story with Kate; I was still feeling ashamed.  I quickly pointed out to her that I did not look at him, below the waist; wondering why I felt the need to add this detail.  I then told her, but it was not in a work environment that the incident occurred, as if that somehow lessoned the trauma.  It took me about five minutes, after telling her the story, to come back and tell her but I did work with him and report to him; why had I not seen that before?

Unfortunately, as I have already shared with my readers, I am part of the 1 in 6 women who has been raped, but being a survivor does color my feelings on sexual harassment, which I have also experienced both first and second hand. While sexual assault and harassment often, sadly, go hand in hand, sexual harassment, especially in the work place, is an evil that stands alone; and yes, I too have been one of the countless women who have been harassed in the work place, including at such levels that it became intolerable and I quit my job.  It is not right.

Recently, we have had some relief, in our home, from a sexually inappropriate and harassing situation related to work; but only some, as today the evil in our life has struck again.

Without a doubt, the man who has tormented us this year, has been responsible for an enormous amount of stress, countless wasted hours devoted to documenting his atrocities, as opposed to doing something productive, more than a few moments terrified for our physical wellbeing, time spent justifying, pondering, explaining, fighting, addressing, his vile lies about quality of work – all because, as he put it, screaming at the top of his lungs: “I cannot feel you, you need to make me feel you, I am your boss and you will do whatever I say, I am not feeling you, so even though I could have paid you a lot more, I did not because I do not feel you . . .”

When this insanity began, my initial response, like so many other women who have been conditioned by abuse, was it will pass, just wait it out. Do you know what I mean?  Whether the blows are physical, sexual, or mental, we are trained to tolerate it, and learn to hold our breath, praying for strength enough to endure.  The taunting and degrading comments, in this case, did not lesson, rather by not fighting back, this perpetrator was only more infuriated and stepped up his assault.  He attacked financially, and then he attacked work ethics and ability, when none of that was enough for him, he turned to stalking and retaliatory actions that among others things forced us to think about our physical and financial future with serious concern.

Now, before we are accused of doing or saying nothing, be assured that we did act. Foolishly, we started with Human Resources, a complete waste of time, we then took this matter to his boss, and her boss, and his boss . . . all the way to the Chief Executive Officer.

The harassing boss’ retaliatory action was rescinded, because of course it had no merit, and we were told to pretend it did not happen, that we should go back to the way it was, before the vile boss perpetrated an act that in my opinion was only designed to create a groveling begging response that he did not get.

We were willing to go forward, but wanted a written apology, an acknowledgment of what had happened; can you imagine all we were asking for was an apology? Of course there was no apology from any of them, including the Chief Executive Officer.  The message was very clear, you just need to take it and make him happy so there are no problems in the future.

For months nothing changed, until one day, at our wits end, we called the Equal Employment Opportunity Commission. I have to say, the call felt a lot like it did when I called the Rape Crisis Hotline, in Long Beach; I started that conversation by apologizing for bothering them and telling them that I do not know if this is a real issue, because I had known my attacker.  Thankfully, the conversation with the EEOC also ended a lot like the one with the Rape Crisis Hotline – we are here to help you.  Of course, once the process of putting pen to paper began, the document that developed was a lot like me remembering the coworker who had stripped, while in the bathroom, it was not just one incident or one manager or one injustice; there was a pattern of discrimination and harassment that cried out to be answered.

As that process has progressed, which includes the employer being notified of the complaint, there have been many anxious moments wondering what will come next. The harassing boss, however, never let up his behavior, in no small part, in my opinion, because none of his superiors or any of the HR partners found his behavior wrong.  I am sure they knew that if they agreed that his behavior was inappropriate and illegal, they would then be faced with having to address this behavior, and apparently corporate America has not caught up to the business of television, entertainment, and hopefully politics, where sexual harassment and assault are no longer going to be tolerated, dare we hope.

This story is not finished, neither for our country, nor in our home; and as we daily learn of more public figures who have abused their power and raped, molested, assaulted, attacked, harassed, and penalized women I continue to be in a state of shock, with a slight undertone of hope.

It took a letter to the whole chain of command, asking why the harassing boss’s behavior would continue when this matter was already at the EEOC, for him to be removed from our life. It seems the right hand may not have told the left what was going on; suddenly there was a fresh breeze blowing through our home.

What the EEOC will do is yet to be seen, and it is our understanding that it will be months not weeks until we know their findings. However, having that case number is surprisingly empowering.

As for our nation, may I recommend we choose to stand with the women, who are also being empowered by a number; can you imagine how difficult it is to stand alone against anyone of the sexual predators that have been exposed this year? May they all continue to gain strength from one another, how else could they bare this process; and may we vow to no longer tolerate or perpetuate this spirit of disrespect for women that has permeated our culture for far too long.

We need to stop objectifying women, laughing and going along with “entertainment” that degrades women, and teach all of our children to respect women as people. That is all for now