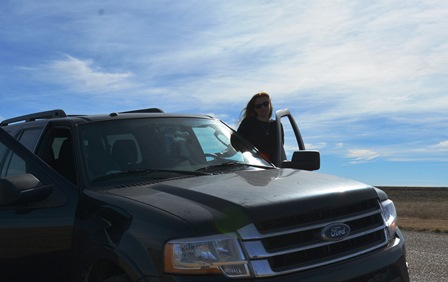 There was a day in May, now many years passed, where I remember sitting in my senior seminar, at the university, reading, listening, and discussing my classmate’s dissertations – our last hurdle to graduation. There were comments about punctuation and grammar, the meaning of terms and their application to each other’s papers, and lots of questions, which we hoped would bring clarification to the varied topics and outstanding marks on our final paper.

As the class drew to a close, that afternoon, the professor, who I liked quite a lot, said that we needed to remember that in a few short weeks, when we walked across that stage, and were awarded our diplomas, we would officially become historians – the words and the facts behind the words mattered at the moment and into the future.

I left class and made my way to the car, thinking about what it meant to be a historian. In my lifelong search for identity, this man had effortlessly assigned an identifying word to me:  I was about to become a historian; which according to Merriam-Webster is a student or writer of history, a writer or compiler of a chronicle.

For the next several weeks, after that class, I walked around my world, trying on the hat of a historian, attempting to analyze what my life, as a historian, would look like. Oddly, what I soon came to understand, is that even before the degree in history, I had already been a historian – perhaps just one less educated, but nevertheless, as long as I could remember I had been chronicling events and hoping to gain understanding about the past, convinced that the key to the present lay in the past.

After having majored in everything from Russian Literature to Cinema, I had finally found the perfect major, and it encompassed all of my interest; it is the thing I most love about history – everything from the arts to the sciences is history, the possibilities of what to read, see, study, do, experience . . . are endless!

For the last several weeks, I have been thinking about the fact that this month, will mark the ninth year of That Is All For Now, an endeavor which I began kicking and screaming, at Kate’s persistence; and with your indulgence, I would like to reflect a bit on this missive.

That Is All For Now has become the perfect vehicle, for this historian, to preserve and explore quite a few peoples histories, as well as capturing significant moments in our collective lives, documenting the beauty and brilliance others have created, and recording at least one woman’s experiences and perceptions of the world she lives in and the people she has been privileged to share her life with – both the good and the bad.

Initially, I wrote only the piece which has become From the Editor, but as I began to master the environment; the possibilities of what could be done became endless and I became bolder. I love poetry, and delight in sharing poems I love, written by others, but I must say there was also quite a joy when I first published my own poems; I reasoned regardless of the fact that I may not be the poet Neruda was, it was not like I was forcing anyone to read them, but oh my, what a thrill when the first person told me that my words had spoken to them, describing their feelings about my work, like I felt about Neruda.  Then I decided to start adding my pictures to my poems, something I plan to do more of, in the near future, including poetry already published.

By the way, I do notice all of the “me, mine, and I’s”, but we are only turning nine once, so I shall ask you to bear with me, a little longer.

As I grew into the process, I began to entertain rather grand ideas, thinking perhaps this format would produce the next Paris Review or Ted Talk like articles; I imagined all of the brilliant people, in my life, writing about their passions and expertise and offered columns to them all, there were not that many takers, as it turned out.

I also thought it would only be about words – no pictures, let us bring back the written word! I was wrong about the pictures, not only are pictures a wonderful tool, enhancing the ability of the historian to tell and record a story, event, or time period, but they also enrich our understanding and appreciation of people, places, and things.  I now have logged over thirty thousand images, in my library, specifically to be used on That Is All For Now.  There is nothing that can make me feel behind more quickly than looking at file upon file of places captured for Public Square, the feature which demands the most time to produce, that I have not so much as gone through and begun to edit.

In fact, the collection of such images has changed the way I go anywhere and everywhere. I no longer stand in front of a painting, at a museum, and simply let it enrich me passively; instead, I photograph not only the painting (after asking if I may take pictures inside the establishment) but I also make sure to photograph the artist and name of the painting.  When I pull over, at some road side detour, I photograph street signs and welcome plaques, to make sure I know what town I am in, when I get ready to share the moment with you.  I also make sure to get a brochure where ever I can, though I make incisive notes, I assume there may be some interesting fact I may overlook or forget, having it in writing is best.

My other fails include not photographing the food I make; I cook all of time, have a four inch binder filled with my own recipes, but no pictures. I am working on this, look for Food to flourish in the near future.

Also, I was wrong about the entire notion of money – I hated the advertisements that we tried, as much if not more than I hate them when I go to other sites today, and they constantly block what I am trying to read. Our readership is shockingly, to me, significant, and thus according to those who know, profit should be on the radar, but it never has been.  I have the privilege of enjoying this process for the sheer pleasure it brings to me and hopefully to you; and I do enjoy it, though the stress I feel at the end of the month, as the hours tick away, and the 1st fast approaches is palatable.

I often have to remind myself that the deadline, to have the front page up on the 1st, of the month, is self-imposed!  My webzine is not headed to a printer, I simply have to push the Enter button, and all will be well.  Nevertheless, until the front page is perfect, I am slightly crazed; but oh what a joy when it is exactly as I wish it to be,  I turn off the computer, and finally hit the shower – there is little, which I have experienced, that come close to the sheer pleasure and satisfaction that comes from writing something, which I am pleased with and has been sent out into the world to be read.

When I first began to publish That Is All For Now I committed to never writing anything which was untrue. That fact has left more than a few very significant moments, in my life, over the last nine years, out of this history, though I do say if you read the poetry you know more than you may want to, about how things are really going, I write this with a slight smile.  There are many facts, which get left out, for various reasons, from either simply being too much information, to being irrelevant, to me believing that you do not actually need to know who I was thinking about in 1986 when I wrote that poem; but I am pleased to say that to the best of my knowledge and ability what I have published in these voluminous pages is and will continue to be true.

My love to go has not diminished, though I do find I need time at home to write and publish; however, I travel more encumbered than I once did. I travel with a camera and a computer that both weigh more than I wish, but I cannot be without my tools – who knows when an animal for In the Wild! will appear, or a landscape that screams out In the Garden, or the perfect View From the Road.

I do not know how my professor envisioned my life as a historian, but I do know that I love the history I am privileged to record and share with you. The reading, research, writing, and travel, which I have done for these pages, over the last nine years, has enriched my life in countless ways – I love living in a world where one picture sends me off into ten different directions, where I find I have written five pages, after having read one hundred, about something which I will then edit down to a paragraph or two, remembering you may well be reading this on your phone.

It has been a wonderful ride thus far, and I am looking forward to sharing so much more with you; thank you for reading these pages. That is all for now.