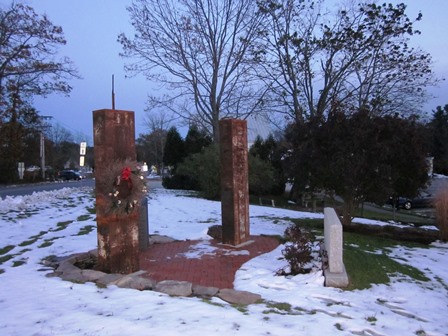 I do not know why it surprised me, but it did. At the end of a quick trip to Freeport, Maine, as we were leaving town, driving down Main Street, these two steel beams, caught my eye, and we decided to stop and take a look.

I was not expecting to find the towns Memorial to the Victims of the Nine-Eleven attacks; but on a very cold night, as we walked around what I found to be a very honorable and dignified Memorial, I was reminded, once again of how important it is that we each stop to remember and reflect on that day’s events and the loss to our nation. 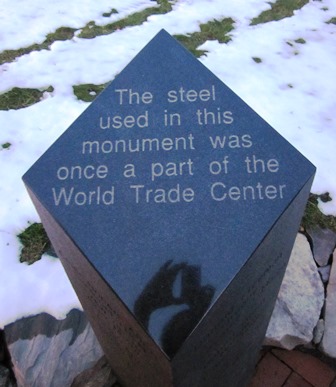 Below is an article from the Portland Press Herald, which speaks about the “Flag Ladies” as well as the Memorial: 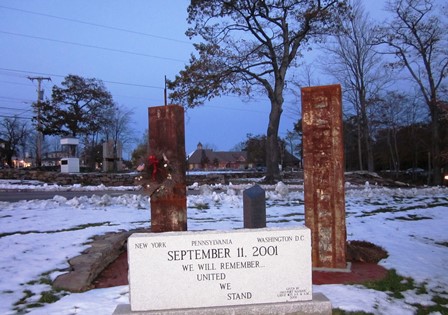 “Freeport groups that are planning commemoration ceremonies for the 10th anniversary of the Sept. 11, 2001 terrorist attacks have arranged for two steel beams from the World Trade Center to be erected in town as a monument.

The two beams, each 25 feet long, will be trucked up Route 1 from Kittery on May 21, escorted by an honor guard, said Kathleen Meade, a spokeswoman for Freeport Commemorative, the group that is arranging the events.

The plan is to have the two I-beams erected in a park alongside the police station, where a memorial stone already stands and where the town displays the flags from veterans’ coffins on Memorial Day and Veterans Day. The installation is designed to be reminiscent of the towers.

The Freeport Masons were instrumental in obtaining the steel beams, Meade said.

Freeport is home to the Flag Ladies, three women who, since the terrorist attacks, have appeared every Tuesday and on the 11th of every month on Main Street, waving flags and responding with waves to drivers who honk their horns as they pass.

The women, with their stars-and-stripes blouses, have become well-known throughout the state and elsewhere for their dedication to remembering the tragic events of 9/11 and for honoring the sacrifices of American military personnel.

They and others in town decided to organize a series of commemorative events on the 10th anniversary of the attacks, in which hijacked jetliners were intentionally crashed into the World Trade Center and the Pentagon, killing thousands of people.

“It merits noting because it was a pivotal point in our history,” Meade said. “We’re emotionally changed people.”

Three days of events are scheduled with music, displays, ceremonies and parades, culminating with a dedication of the 9/11 monument at the public safety building at Main and West streets.” 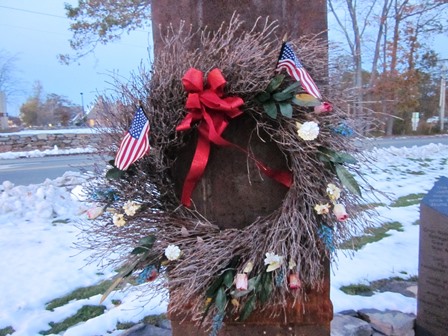