When I saw this letter recently, it surprised me in so many ways – it was not in my file of Peter’s letters, rather it was with my correspondence from my Mother.

It was a letter I had written my Mother, while on my second trip to Europe 31 years ago, which Peter had agreed to take home, to Canada, along with a box of my belongings and purchases, made on that trip, in the days before I learned that it was better to under pack and under purchase; he would eventually mail me the box, but quickly after his arrival home mailed the letter to my Mother.

I had not looked at it in years, but soon found myself smiling warmly and longingly, remembering Peter’s talent, care, and whimsy.

There was so much captured on that one envelope. To me he was always Peter, but he signed his envelope as Pete.  He knew my Mother called me Jill, but he addressed me as Chris. The gesturing hands, so much sparkle with just an ink pen!  Why the rabbit?

My Mother kept the letter and protected the envelope. Today is the anniversary of Peter’s death, in Afghanistan, at the hands of a suicide bomber.  With this simple post, I pay homage to two extraordinary people, both who I miss for different reasons – I wonder if they have finally met. 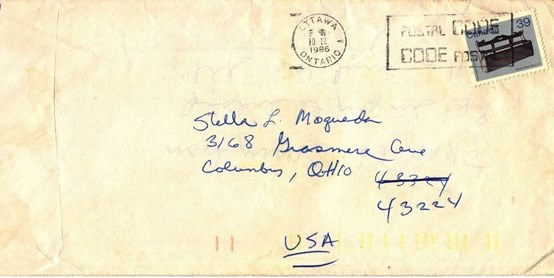